When former AFL player Brad Johnson and partner Donna Johnson noticed a lack of protective gear for female athletes, they decided to fill the gap.

Carlton AFLW midfielder, Lucy McEvoy, is familiar with the consequences of the rough and tumble of contact sport, and the kind of physical protection she needs on the field.

However, when she was invited to try the Zena Sport vest to protect her upper body and ribs during training and games, she was initially hesitant. “I don’t like wearing tight-fitting clothing, but it made sense that if you wear a mouth guard to protect your teeth, you’d wear a vest to protect your ribs and breasts, so I gave it a go,” Lucy says.

Her verdict after wearing the vest for that first training?

“I felt like I could run through a brick wall with it on,” she laughs.

Lucy has worn the protective vest ever since – for three seasons now. Other AFLW players and players from other sports, including basketball, softball, and lacrosse, are using the vest and learning about its benefits.

It’s a great result for an innovative Victorian start-up that began as a great idea, but needed research, garment expertise and business support to bring it to life.

The concept for the protective vest arose several years ago when Donna was speaking with a friend about the potential physical toll on teenage girls’ bodies.

“There wasn’t much in the market specifically designed for the female body, so that’s where it began,” Brad says.

The concept of a lightweight woman’s vest that would protect the upper body without restricting movement required a lot of work. The couple had plenty of experience with sports but faced a new challenge when it came to manufacturing, marketing and business. 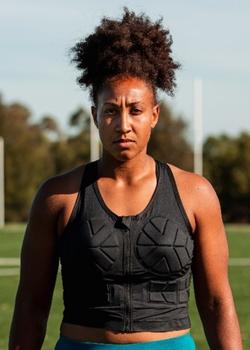 n collaboration with female athletes, a designer and with over 12 months of testing at the Centre for Sports Research (CSR) at Deakin University, Brad and Donna were able to create a garment with specifically chosen materials, padding and designs that targeted the needs of women, girls and non-binary athletes.

“[Deakin University] got some fantastic results, so we could let people know that our vest was of the highest standards,” Brad says.

The next learning curve was for the Johnsons to develop their business and marketing strategies, including how to get the best manufacturing deals.

“Our backgrounds were in sport – we haven’t been to business school or anything. We’ve had to learn on our feet,” Brad says.

ASTN focuses on the commercialisation, development and promotion of Australian-inspired sports technologies, and provided Zena Sport with ongoing mentorship and expertise to help take their idea from a sample product to a thriving, innovative commercial enterprise.

Zena has made inroads into Australian women’s sport and, most recently, has developed the Zena Youth Vest for girls eight to 13 years old. “The ASTN program supported us through the development phase,” Brad says.

“Working with our mentor, Craig Hill, was fantastic. He guided us and made sure that we found our way early and entered the sporting landscape with the best approach.”

Brad encourages others with a good idea to explore the possibilities and to seek expertise and support.

“It takes time and patience to navigate and understand what’s needed. Don’t be afraid to ask questions or learn something new. Pushing through the last five years, that’s been the biggest challenge but the most rewarding aspect.”

Lucy McEvoy is one of many reaping the benefit of the Johnsons’ hard work and the business support they’ve received through ASTN.

“In the Zena vest, you have the confidence to hit a little bit harder, and not be as hesitant to run into a pack,” Lucy says.

Field clashes that once left her sore and needing recovering time are less debilitating due to the protection from the vest.

“The fun part of the game is playing, and you want to be out there every week. The vest enables that.”