In the lead up to International Women’s Day on 8 March, we attended an event with some of the state’s top female scientists and students.

“Why not go out on a limb? That’s where the fruit is.” 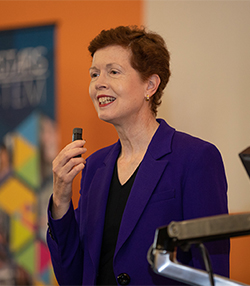 This quote (widely attributed to author Mark Twain) was cited by Victoria’s Lead Scientist Dr Amanda Caples in her address last month at RMIT University on International Day of Women and Girls in Science.

Twain’s tree branch analogy, according to Amanda, is what women need to do to succeed in the traditionally male areas of science, technology, engineering and mathematics (STEM).

As Amanda noted: “Get out on that branch. Take the risk. Sometimes, people will shake your branch and sometimes people will want to try to push you off it. But get yourself back up. Climb back up. All of the [successful STEM] women before you have had that experience.”

Well-known female scientists such as Marie Curie (inventor of the x-ray and two-time winner of the Nobel Prize in 1903 and 1911) and British chemist Rosalind Franklin (who helped discover the structure of DNA) would likely relate to the branch concept. Their contribution is increasingly important as Australia moves to a digital and technologically driven economy. “We need a workforce with skills for the jobs of the future,” stated Amanda, pointing out that the Victorian Parliament’s proposed Gender Equality Bill 2019, due to take effect in 2021, will further encourage more women into STEM careers.

While the bill is a step in the right direction, gender imbalance is not going to be solved overnight: bias and stereotyping shape girls’ views of STEM from school onwards. In Year 12, boys outnumber girls three to one in physics, and almost two to one in advanced mathematics.

Participation rates in these critical subjects extends to tertiary level, where women make up less than one third of STEM university graduates. Under-representation in IT and engineering education is of significance: in 2016, women comprised less than 15 per cent of domestic engineering and related technologies undergraduate course completions.

Naturally, this has repercussions on employment: figures from 2016 show that only 16 per cent of Australia’s 2.3 million-plus STEM workforce are women.

But it’s not all doom and gloom. Inspiration can be found in other female scientists who, like Amanda, spoke at the event. Take Dr Gillian Sparkes, Victoria’s Commissioner of Environmental Sustainability. She advised the students that “education, experience, attitude and hard work” are the necessary ingredients for women to succeed in a STEM career. Gillian noted: ”I worked as a scientist for BHP in the 1980s and I was the only woman in the lab with about 40 men – for 10 years.”

Another scientist and speaker, Jacqueline Tate, a STEM partnerships manager at Coder Academy with a project management position in Myeloma Australia’s Medical and Scientific Advisory Group, advised the girls to put their hands up and ask questions in class as, “a love of science is a love of asking questions.”

“We need more women in science because we need the best brains working on the world’s most pressing problems. Science is for all of us. Women can help cure diseases, explore far away galaxies or even perhaps build a computer game that allows them to retire at 17-and-a-half!” said Jacqueline. 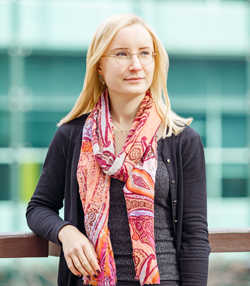 RMIT civil engineering student Eve Smolinska spoke about her early passion for engineering, developed by observing her surroundings, growing up in Warsaw where the main square – tenant housing, hospitals, churches, education facilities – was almost entirely rebuilt after being bombed during the Second World War. She moved to Australia in 2017 to study engineering and follow in her family’s footsteps.

“My father’s an IT manager and my mother is an environmental engineer working for the government in Poland,” she says. “Having family role models in the STEM disciplines certainly impacted my decision to study engineering. At universities in Poland, the ratio of women to men studying engineering is close to 50:50. Unfortunately the situation in Australia regarding STEM looks very different.”

As a student in STEM and a future engineer, she believes the most exciting thing is the construction boom taking place in Melbourne and the opportunity to be a part of major infrastructure projects.

After more women in leadership inspiration? Check out this Global Victoria initiative.

Or for more about the women in science who spoke at this event, visit the Superstars of Stem page on Science and Technology Australia’s website.