They’re both pristine and green, yet the alps of Victoria and New Zealand have more in common than you may think. New research confirms the Victorian Alps are still rising, and that this is due to New Zealand.

An 18-month seismic survey delving 60 kilometres vertically into the Earth’s crust reveals some surprises about the 629 kilometres of mountain ranges stretching from Benalla in Victoria to Eden in New South Wales.

Using the latest seismic technology to study ground beneath private and public roads around Benalla, Myrtleford, Eskdale, Tom Groggin, Benambra, Wulgulmerang, Tubbut, Bonang and Bendoc, it confirms that the uplift of our ranges is due to an ongoing tectonic plate boundary collision in New Zealand. Every year, New Zealand’s alps are being pushed up by around 12 mm – very fast by the world standards – and as a side-effect of this, Victoria’s Alps are rising by about 0.1 mm. 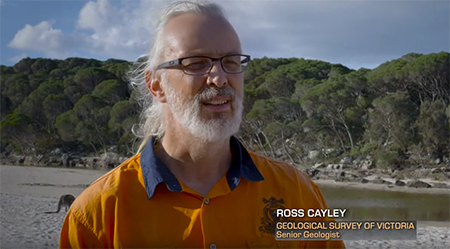 “Continent is running into continent at a few centimetres per year in New Zealand,” says geologist Ross Cayley from the Geological Survey of Victoria (GSV), the Victorian Government’s geoscience agency. “This collision causes stress in the New Zealand rocks, and that propagates west all the way into South East Australia: enough to push up some of our mountain ranges.”

The practical insights from this finding are many.

First off, it allows us to be more predictive about earthquake threats in Victoria and this, in turn, allows for better planning of infrastructure such as dam walls and power stations, and for developing better management plans for existing infrastructure. That’s significant as damaging earthquakes of up to nearly magnitude-6.0 have hit Victoria since European settlement, including the Moe earthquake in 2012. “The research can work out which regions of Eastern Victoria lie above and below major tilted faults, and so better estimate potential earthquake risk from these structures should they reactivate,” says Ross.

Mineral exploration may also be given a leg up, Ross adds. “This might help refine geological connections between states: for instance, testing whether regions prospective for minerals in New South Wales may extend into Victoria.”

While the new data can’t pinpoint the exact location of a mineral deposit, it may direct geologists to the ‘right district’ where exploration success for a given commodity is possible, even if that location is nowhere near the actual seismic survey data location. Relevant mineral deposits include gold, copper and new-technology metals like lithium and ‘rare earths.' Victoria’s bedrock is too old for coal and has been heated too high in ancient times for oil or gas.

The outcome of the new research, says Ross, is that the potential efficiency of mineral exploration might be massively improved via geological insights, meaning less money wasted on exploration and less landowners impacted directly.

Farming productivity and environmental management are other areas that could be helped by the new data, as soil chemistry, landforms, water access, erosion and salinity are all related to the rocks beneath.

As these examples illustrate, geology’s insights are broad and ongoing. Access to up-to-date geological information enables the State Government and other agencies to make estimations of geological risks that need management and investigate potential geological opportunities that may create wealth. 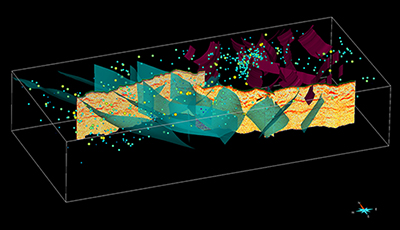 Ross delves further into the wealth and geology link. “Much of Australia’s current and historic economic wealth is derived from the proceeds of mining: Melbourne was built on the wealth of the gold rushes, as was nearly every inland Victorian town, and the proceeds of mining still underpins Victoria’s wealth today,” he says. “All the resources we use: smartphones, water pipes, solar panels, wind turbines, cars, trains, roads, house roofing, nails, screws, bricks, glass, plastic, rail, wiring – come from material extracted from the earth. Victoria’s groundwater that all farmers rely upon to grow our food comes from geology, too. And this isn’t going to change any time soon, unless and until we can find another planet to harvest resources. With better understanding of geology comes the opportunity to do earth resource exploration and extraction and planning more efficiently and hopefully with lower environmental and social impacts.”

While these insights are clearly far-reaching, what’s interesting is that geology is a relatively young science. Medicine and astronomy have been around for hundreds and hundreds of years, yet geology only hit its straps in the 1960s with the development of Plate Tectonic Theory. “Since then,” says Ross, “geologists have become much better at establishing the age of rocks and at remote-sensing buried rocks – called geophysics. Geophysical surveys and the use of computers to image and interpret that data, and model how the Earth can behave, has been a modern breakthrough. It’s an exciting time to be a geologist. It’s also cool that modern Global Positioning Systems can map continents drifting at centimetres per year in real time – it’s proved Plate Tectonic Theory.

“By understanding how geology has formed in the past, and by tracking what’s happening today (including continent drift-rates as measured by GPS), we can run the geological clock forward and imagine Australia in its future. Since Australia is currently drifting north at about seven centimetres per year, every year, we’re going to get much better acquainted with East-Asia, for a start.”

Also, we might become better acquainted with New Zealand as Australian geologists and geologists across the ditch may collaborate on future projects. “Like Australia, New Zealand was once a part of the supercontinent Gondwana 500 to 100 million years ago when most of the bedrock geology of Eastern Australia and New Zealand was formed by plate tectonics,” says Ross. “Although separated today, there’s commonality between Victoria’s and New Zealand’s (particularly South Island’s) geology. We share our understanding of Victoria’s geological evolution in aeons past with New Zealand geologists, in the hope that they might use it to better understand their own geology. And vice-versa. It’s a rising tide that lifts all ships.”

Nate Byrne in front of a camera
Farmers walking on their land
Breaking the ground for the Hydrogen Energy Supply Chain trial.