It was Jesse Cooper’s memory that made the design of the Mia Mia sculpture - a place of family gathering, a shelter and safe place.

“I went for a walk in the bush and remembered what my father, Wally Cooper, taught me when we were kids camping over at Cummeragunja on the Murray River - making Mia Mia’s in the bush with him and my brothers and sisters. I used the knowledge that he taught me way back then,” he says.

“It started from one sheet of steel, and it just built itself after that – from one layer to the other.”

A welder by trade, Jesse had never been involved in an art project before. He is one of 15 Yorta Yorta artists who have created large-scale artworks as part of the Winton Wetlands sculpture walk, funded by the Victorian Government. Lotjpatj Natjan Danak.The yarning and gathering pathway features sculptures that share the spirit and culture of the Yorta Yorta people. They tell the stories of Ancestors – their beliefs, totems and special places, and the ancient knowledge of the land that once sustained them.

“I would like people using the Mia Mia to feel a sense of connection to the land, as us aboriginal people do,” Jesse says.

Steeped in a natural reserve of 8,750 hectares, Winton Wetlands is located 2.5 hours north-east of Melbourne, between the towns of Benalla and Wangaratta.

“Aboriginal people would have lived around this area since time began, I’d say,” says Jesse.

The Yorta Yorta people were the original Aboriginal inhabitants of the Winton Wetlands, using the resource-rich wetlands as an abundant life source before being displaced by European settlers in the 1860s.

Turtles, fish, birds, eggs, emu, kangaroo, possum, wallaby, yabbies and mussels made up some of the original flora and fauna of the wetlands, including native plants that had multiple uses in food, tools, weapons and other objects. 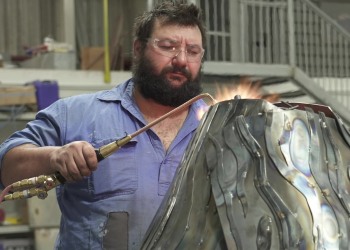 Today, Winton Wetlands is the largest wetlands restoration project in the southern hemisphere, and refuge to 180 native species of birds, fish, frogs, reptiles, bats and plants, including endangered species.

It’s the first site outside the US to be classed as a Wetland of Distinction by the Society of Wetland Scientists, a prominent voice for the world’s most valuable wetland ecosystems.

The Yorta Yorta totem, the turtle, is present across the site, including large-bodied turtles such as the Eastern Snake-necked Turtles and the Murray River Turtle. The totem is also represented in the sculpture walk as a large sprawling turtle geoglyph - connecting the artworks together.

Archaeological assessments of the wetlands have discovered details of Aboriginal cultural heritage along the original banks of the wetlands, including scarred trees, tools and other artefacts. 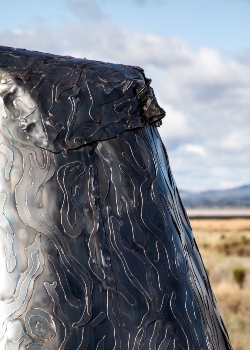 “We tried to find the sizes of the materials and branches they would have used from the bush. I tried to replicate the black box trees, the gum trees and other things that they’d use,” Jesse says.

He then layered the steel to mimic the look and feel of the natural materials.

“That was the hardest part of it - trying to replicate that bark look so that people can feel it and connect with it.”

Turning his skills as a welder into an art form, Jesse was also the fabricator for two other steel works; Yakapna, meaning family, by the late Indigenous artist Vera Cooper and Bunyman wokin mukuga, meaning made from country reeds, by Denise Morgan-Bulled.

His work with his cousin, Sissy Cooper, daughter to the late Vera Cooper, allowed him to reconnect with family. The life-sized sculptures, Yakapna, are a reinterpretation in steel of three figures, with Jesse's sister Anita replicating the intricate and culturally significant marks on the original works.

Narelle Vogel was the creative producer for the project.

“My role really was about connecting the artists with the idea of a sculpture walk and then working very collaboratively to help them understand how their idea can go from something in their head, or a painting, into a 3D sculpture,” Narelle said.

“As creative producer, one of the stories was about saying to the artists, ‘hey trust me – we can make this work in a public art space – you just have to hang in there with the process,” Narelle says.

Yorta Yorta Traditional tribal lands cover 20,000 square kilometres on both sides of the Murray River - from Cohuna to Albury Wodonga.

“Because Yorta Yorta country is really quite enormous, we’ve got artists from Shepparton, Echuca, Wangaratta, Albury. It’s a really diverse group of Yorta Yorta artists and to be able to bring them together in the one site is really spectacular.”

“It’s that challenge of being able to express how deeply the community have connected with the project,” Narelle says.

“The Winton Wetlands through this project was able to really actively signal that the community is welcome and that this is their space. The commissioning of the works is the start of Yorta Yorta coming back on country.”

The Winton Wetlands sculpture walk has been funded through the Victorian Government’s Regional Tourism and Infrastructure Fund and delivered by Regional Development Victoria.

Artists Chris Hume and Simone Thomson standing in front of their Dancing with Creation mural
Artist rendering of the exterior of the GovHub including facade artwork: Giramal (shield) Buri-Gutang Djaa (journey) by Natasha Carter
Stuart Hearn’s mural at the Port of Echuca Discovery Centre