Johnson & Johnson Innovation, the external innovation arm of the pharmaceutical giant is teaming up with one of Victoria’s top research institutions, Monash University. We find out why.

Operating since February, the game plan has been to identify medtech projects that can turn today’s breakthroughs into tomorrow’s commercial successes.

It’s an attractive opportunity for the 23,000-plus people working in Victoria’s 650-plus medtech, biotech and pharmaceutical firms. Johnson & Johnson is the world’s largest healthcare company with more than $70 billion in annual revenue and some 250 subsidiaries operating in over 60 countries.

This isn’t the first time the Johnson & Johnson Innovation team have worked with local institutions – collaborations have already occurred with Monash University, the Walter & Eliza Hall Institute, the University of Melbourne, RMIT and St Vincent’s Institute. However, this latest initiative will act as a hub to coordinate and upskill the Victorian life science community and develop programs to turbo-charge connectivity at both a state and global level. This includes connecting Victorian researchers with leading minds at Johnson & Johnson Innovation’s Centre for Device Innovation at Texas Medical Centre and FutuRx in Israel.

A commitment of this significance from Johnson & Johnson Innovation is testament to Victoria’s local research smarts. And it’s an indicator of the government’s commitment to grow the state’s medtech, biotech and pharma industry, which has already tasted strong commercial success. Revenue in the sector has quadrupled since 2003, exports have doubled since 2011 to $1.3 billion, and Victoria is currently home to more than 40 per cent of the health science companies listed on Australia’s stock exchange.

Melbourne, for its part, has been a significant player in that success. The city’s medical research and tertiary education business is so strong that it attracts more than 40 per cent of Australia’s total competitive medical research funding. What’s more, Melbourne is one of only three cities worldwide to have two universities in the global top 20 biomedical rankings and one of these, Monash University, is ranked second only to Harvard University in pharmaceutical sciences. 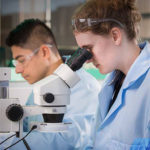 This device-focused challenge by the Victorian Government in collaboration with Johnson & Johnson Innovation is aimed at game-changing early-stage medical device innovations. The Victorian Government will award up to $300,000 to the top solutions, and access will be provided to the device prototyping lab, plus mentorship and coaching from Johnson & Johnson Innovation’s medical device experts. Applications close 22 June 2018.

Find out more about the challenge.