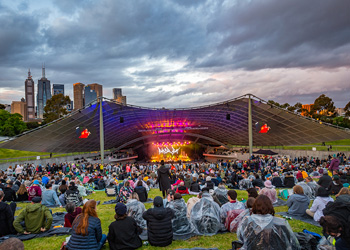 The state is back open for business with the long weekend marking the return of major events in Victoria.

Victoria’s music, arts and major events sectors raced back to life over the long weekend, with thousands of event and gig goers soaking up the culture that is central to Melbourne’s identity.

Crowds returned to the Spring Racing Carnival and concerts at Sidney Myer Music Bowl and smaller venues across the state, as Victorian’s enjoy the state’s safe reopening as part of Victoria’s Roadmap to Deliver the National Plan.

The joy of live music was heard through the nation’s music capital, with close to 4,000 music lovers attending the Play On Victoria concert at the Sidney Myer Music Bowl on Saturday 30 October.

The sold out concert featured home grown talent including King Gizzard and the Lizard Wizard, Baker Boy, Amyl and the Sniffers, Grace Cummings and Vika and Linda Bull, and marked the safe return of live music for Melbourne music lovers.

“The Play on Victoria concert at the Sidney Myer Music Bowl, which Mushroom was proud to be a part of, is an important step in getting large scale music live events back up and running in Victoria – the music capital of Australia,” said Matt Gudinski, Chief Executive of the Mushroom Group. In addition to being double vaccinated, all attendees were required to wear masks and each of the venues were broken into zones to allow for social distancing.

Roger Field, President Asia Pacific of Live Nation said “Music plays a crucial role in society and we need the magic of live entertainment more than ever before as we emerge from the pandemic. This is just the very start and we can’t wait to deliver more live experience to meet the huge pent up demand from fans, and the thousands of artists who can’t wait to get back on stage – let’s Play On Victoria and celebrate!”

The race that restarts Australia

The Spring Racing Carnival saw Melbourne once again put on a show to a global audience, with approximately 5,500 racegoers flocking to Flemington Racecourse for Saturday’s Derby Day and 10,000 for the Melbourne Cup, marking the first time crowds have been trackside since 2019.

Racing has been front and centre as Victoria begins to welcome back crowds to events under the Roadmap to Deliver the National Plan.

The Warrnambool Racing Club was one of just 15 businesses across the state chosen to take part in the Victorian Government’s regional vaccination trial in October. The Thursday 14 October race day was selected by the State Government and Country Racing Victoria after Warrnambool hit 95 per cent of its eligible population receiving their first vaccination. Warrnambool Racing CEO, Tom O'Connor, said the trials provided an opportunity for his team to learn and understand how events will be run as the state reopens.
“This was the first time that our customers had to show their vaccination so there were a few instances where the team had to try and help them, but the more people get out and about and back to normality, whether it be going to the races or the pub, demonstrating their vaccination status will become normal,” Mr O’Connor continued.
Derby Day on Saturday 30 October was the first Victorian event to be conducted as a Vaccinated Economy Trial under 80 per cent double-vaccination settings on the Roadmap.

The Chief Health Officer approved a fully-vaccinated crowd of up to 5,500 at Flemington for Derby Day under strict trial conditions including separate zones with dedicated course entrances, allocated seats, seated service of food and drink and mandatory mask wearing.

The Melbourne Cup was also held as a standard event under Phase C of the Roadmap with 10,000 fully vaccinated patrons on course. The same number were approved for Oaks Day on Thursday and Stakes Day to complete Melbourne Cup Week.

Victoria Racing Club’s Chief Executive Officer Steve Rosich said “it was an absolute privilege to see 10,000 people on track to enjoy Cup day at Flemington and we are so grateful to have had crowds back for the race that stops a nation.”

These events followed a series of Vaccinated Economy Trials, aimed at enabling government, businesses and community organisations to work through practical (operational and technology) implementation and management of more permissive settings, ahead of a broader state-wide rollout.

The trials allowed real-world testing of the vaccine certification technology, paving the way for the best processes for establishing vaccination status, as well as fine-tuning training for staff and support for business owners and public communication of vaccine requirements.

Some 14 venues and events in six local government areas operated with higher capacity and density limits.

“Everyone who visited us during the trial saw this as a great step forward to opening up Victoria in a safe way. It’s nice to think that we have played a small part in the re-opening of Victoria,” said Crystal Stubbs, the Director of the East Gippsland Art Gallery.

And in the next phase of trials, Victorians attending Oaks Day were able to quickly and easily check-in and show proof of vaccination using the Service Victoria app, which was linked to their digital Oaks Day ticket on their phone.

Each Ticketek digital entry ticket to Flemington featured a button which attendees can click to check in and show proof of vaccination, without having to scan a QR code.

The solution will allow for faster and safer check-ins, and it’s expected the technology will also be used by other ticketing companies in the months to come.

And what a Summer of events Victoria is lining up, from the Boxing Day Test and Australian Open, to Carols by Candlelight, and blockbuster musicals Moulin Rouge and Frozen opening next week, closely followed by Harry Potter. Check out the websites or ticketing agencies for ticket information and conditions.

Get out there Victorians and soak it up.