The Astronomical Society of Victoria’s all-abilities telescope is making the cosmos more accessible.

“I think I said ‘wow’ about 30 times,” exclaimed Jesse Stout of the remarkable view made possible thanks to the hard work and ingenuity of a local club dedicated to inclusiveness.

“I just couldn’t believe what I was seeing with my own eyes,” Jesse says. 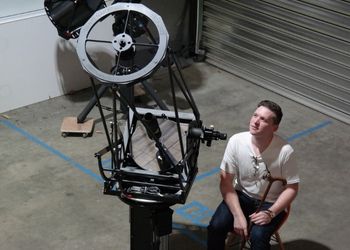 Jesse is talking about looking at a galaxy that NASA calls a “hotbed of star formation” – an area of space that’s especially dense with stars and with a ghostly looking gaseous mass hovering above, called the Tarantula Nebula. (Just like it’s possible to recognise forms in the clouds of our earthly sky, it’s also possible to find forms in the Magellanic Cloud of other galaxies, including the form of a giant spider).

“To actually see this thing that’s taken around 170,000 light years to get to me is just astonishing,” Jesse says. This powerful telescopic vision is made more remarkable by the fact that Jesse is looking through a purpose-built all-abilities telescope, unveiled recently as part of the Astronomical Society of Victoria’s Centenary celebrations.

The Astronomical Society of Victoria (ASV) is an amateur astronomy club, founded in 1922, with some 1700 members. It runs a range of programs from its two sites promoting STEM and the study of the universe beyond our Earth’s atmosphere.

Built by the ASV and situated at its Leon Mow Dark Sky Site – about an hour north of Melbourne and free from light pollution – the new telescope makes it possible for people of all abilities to view distant galaxies, planets, stars and nebulae.

Traditional telescopes of this size require the user to climb a ladder, to stand and swivel as objects track across the sky.

“Having my impairments,” says Jesse, “it just wouldn’t be possible.”

Jesse is 27 years old and lives with a spinal injury. “I use a walking stick to get around. I struggle to sit down and get up.”

“From my hospital bed, after my second major back surgery, I saw the moon through the window,” says Jesse. “I’d always been into astronomy and astrophysics. I was thinking about how all my old hobbies were obsolete. I felt pretty lost, not knowing what I wanted to do and who I wanted to be.”

Chris Rudge, President of the Astronomical Society of Victoria, says “when Jesse contacted the Society while he was in hospital, and he asked us what a suitable telescope for him was to be able to use, we realised we didn’t have the appropriate equipment to make it easier for him to carry out his passion.”

With a $50,000 grant provided by the Victorian Government, through its Stronger Regional Communities Program, the ASV designed and built the all-abilities telescope. Resembling an enormous canon, fixed into concrete and housed in a retractable roof shed, this is no ordinary telescope.

“The main thing about this telescope is that the eyepiece remains at one constant height no matter what elevation we have our telescope at,” says Chris. The sophisticated state-of-the-art telescope, with a specially ground mirror, automatically tracks objects across the sky.

“I am so much happier since joining the ASV,” says Jesse. “I think I learnt more that night than in months of reading different books.”

“The next thing I want to see is Saturn, for its rings,” says Jesse. “Saturn is the one planet every kid knows how to draw. I encourage others with mobility issues to try astronomy. This telescope has opened up a whole new world for me.”

To book the telescope, email: vicepresident@asv.org.au.

For more information, visit the Astronomical Society of Victoria.

Illustration of Kim Ellis, Australia’s first female astronaut
Abhi and Smit (centre L-R) have enjoyed working on a new tech project with Sonia and Erin (outside L and R) from startup, Mountoken
Balloon football all stars on court.