There came a point this year when acclaimed Melbourne street artist Kaff-eine thought she might have to leave town.

“I lost literally 100 per cent of my work for the next two years all within 24 hours,” Kaff-eine said. “My career is international, but I choose to live in Melbourne and I was really, really upset when I thought I would have to leave.”

All that changed when Kaff-eine was engaged to paint a mural in Russell Place to celebrate an initiative which will give 40 Melbourne laneways a makeover through the Victorian Government’s Working for Victoria initiative.

Part of an unprecedented investment in employment support and job creation to get people back to work, the initiative is helping to ensure everyone can play a role in Victoria’s economic recovery.

The Laneway Revitalisation project was launched on 27 November by the Victorian Government and City of Melbourne Lord Mayor Sally Capp, who said the new-look lanes would draw people back to the city and stimulate activity in shops, bars and cafes. 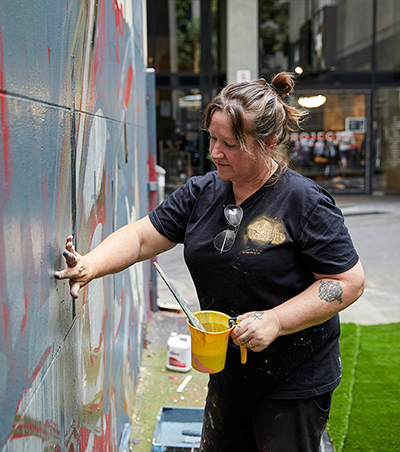 Kaff-eine’s 40-metre street-level mural adorns the wall of an underground carpark, currently being transformed into a COVIDSafe extension of iconic Melbourne cocktail bar the Gin Palace.

Drawing on the lush reds and golds of the Parisian-themed venue, the mural features five of Kaff-eine’s anthropomorphic characters – part animal, part human – known as the Deerhunters.

“This job was a game changer for me,” Kaff-eine said. “I often work with communities traumatised or in recovery and I never thought it would be my own hometown. It’s the first wall I’ve painted since the pandemic and it still doesn’t feel real.”

A lifelong Melbourne resident and honours law graduate, Kaff-eine is passionate about giving voice to the disadvantaged and disenfranchised. Her work always contains an element of advocacy.

“For the last few years I’ve been working with communities living on a dumpsite in Manila. They’re garbage scavengers and we’re making art as housing; painting their portraits and having them printed on to large tarps.”

At the start of this year she completed a project in Wodonga with young persons, organised by award-winning street art network Juddy Roller, painting a mural on the wall between the police station and the court.

“We were painting a wall, but it wasn’t just a wall – it was about treating everyone the same way. Some of the kids were in conflict with the law, but to have senior cops there up on the lift, painting side by side with the kids, put everyone on the same level. The kids decided what to paint and we all painted it together.

“It was an anti-graffiti project, but it also showed the kids that when the work is legal, you get to use the best paint and you get to paint on the best walls.”

Kaff-eine says her new mural also contains a strong vein of advocacy, though Gin Palace patrons may not know.

“My work is always supporting others to tell their story and have a voice,” she said.

“It looks like a pretty picture but there’s always a story behind it. These characters are all Melbourne people who haven’t modelled before; this wall is about supporting these people to see who they are and how beautiful they are. It’s advocacy but people don’t know it.”

The new project also has sealed Kaff-eine’s commitment to, and passion for, her city.

“For me to be painting this wall just means the world.”

For more information or to register for Working for Victoria, go to vic.gov.au/workingforvictoria.