What does the future hold for our international student sector? We hear from the experts.

That was the key message from Global Victoria’s recent In-Conversation Seminar, the first in an ongoing series, bringing together experts from government, industry and academia to give insights to Victoria’s public service on global trends shaping the policy, programs and priorities of the work they deliver. At the event, an expert panel focused on the challenges and opportunities facing Victoria's international student sector. Kicking off the discussion was Georgina McCann, Global Victoria’s Acting Director of International Education, who crunched the numbers.

"International education in Victoria, and Australia more generally, is seeing unprecedented growth," she began. "From a government perspective, the sector is now recognised as vital to Victoria’s future economic prosperity, and as an important source of employment. In fact, the sector has been the state’s largest services export since 2002 – and since then the value of the sector has grown 559 per cent (from $1.8 billion to $11.8 billion).

As she pointed out: "It’s a significant population – around the same size as the population of Geelong. When we have a population of this size coming to live, study and work in our state, it’s not surprising that the sector is having a profound impact on the work we all do across government. In fact, I’d suggest that international education directly or indirectly affects almost every department, group and agency across government." Stepping up to the podium next was University of Melbourne’s Associate Professor, Fran Martin. Fluent in Mandarin, she’s conducting a five-year study of the experiences of Chinese international students in Australian universities. If you’re serious about connecting with international students, speak to them in their first language and with the channel they prefer, Fran stressed. For Chinese students studying in Australia, that’s invariably WeChat, the all-in-one social media platform.

Study Melbourne and City of Melbourne both have Chinese-language WeChat accounts, and Victorian universities, government, educations service providers and others wanting to connect with the Chinese student market would be well advised to follow suit instead of corresponding in English through Facebook or via websites, according to Fran. "Doing so could set Victoria apart from other states in Australia that are also competing for Chinese students, and even more importantly it could enhance the student experience," she observed.

The event’s third speaker, David Livingstone, is a true global citizen. Before his current role as the City of Melbourne’s Head of International and Civic Services, he ran the global engagement arm at the Business Council of Australia and was a senior diplomat at Australia’s Department of Foreign Affairs and Trade with postings in Baghdad, Hong Kong, Nairobi, Ankara, Beirut and Taipei. International education, argued David, is not just about providing quality academic courses. Reputation, responsibility, sustainable policy and support from the host city are all essential to ensure students have the very best experience.

But how do you help make students from overseas feel welcome? In David’s view, by ensuring the quality of student accommodation (perhaps by requiring common social areas in student housing), by advocating social inclusion (for example, by working with tertiary institutions and hosting trips to sporting and cultural events), and by enhancing job skills (for instance, by encouraging international students to apply for internships at the City of Melbourne, which has been shown to contribute to student employability.) And of course, ensuring students know where to access information – about employee rights, résumé writing, tax and visa information – are additional steps the City of Melbourne can help with, he added. 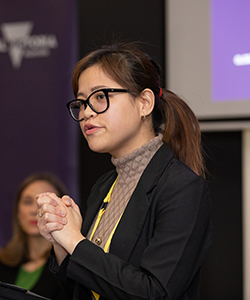 "International students want an authentic experience. They want to feel supported, to connect, and need activities and opportunities that get them involved in the local community," explained the fourth speaker at the event, Hope Dolino. "They also wonder: 'Will I fit in? Will I make friends? Will I find a job? What career pathways are on offer?'"

Hope asked herself those very questions when she arrived in Melbourne from the Philippines to study at Victoria and Monash Universities five years ago. She’s navigated the workforce with volunteering and casual jobs in order to build on her employability. Hope currently works at software company, Practera, coordinating experiential learning programs. Some of the projects she is involved with are available to international students, including the Study Melbourne Live Projects: three-week, team-based extracurricular work experience projects. The projects are all about providing opportunities and empowering international students and helping them build skills and connect with the local community, while organisations (such as Victoria Police) get tangible outcomes. The final speaker Jeffrey Smart, Director and Co-Founder of The Lygon Group, has held senior international education roles over 25 years at Swinburne University of Technology, Monash University and the University of Melbourne. He shattered some persistent myths, particularly related to the capacity of our education and training sector to continue to accommodate growth in international student numbers. In fact, he noted there’s plenty of capacity across the sector – with universities, TAFEs, private providers and some schools keen to grow their international numbers.

"Melbourne is Australia’s fastest-growing city: it’s a more lively, thriving, 24-hour city than it was just a decade ago. Despite occasional media speculation, international students are not the cause of congestion in the CBD. Even international student enrolments in inner Melbourne of 182,908 in 2019 is a relatively small contribution. Congestion is a multi-factor inevitability of living in one of the world’s great cities."

Sifting out the facts from the myths, this event gave insights into what is one of Victoria’s most important sectors. The range of speakers offered the audience varied perspectives on the international student experience as well as providing expertise into how the education sector will look in years to come. Given the positive audience response, it’s clear this new In-Conversation series is off to a promising start.