A Melbourne start-up designing building materials using seaweed residue as a replacement for cement is in the early stages of testing and development. 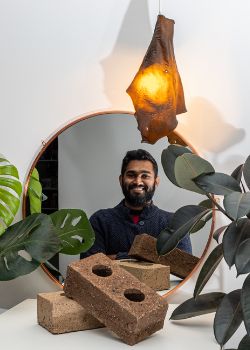 “I am looking at using the residue from brown seaweed as a natural binder, more or less as a replacement for cement in construction,” Shimroth said.

“Companies in the Netherlands and the UK working on similar concepts are proving that it works, Australia has so much potential to create a competitive seaweed industry.

“It’s just a matter of getting the research and technology developed to that stage.”

Phycoforms was created as part of Shimroth’s thesis at RMIT on tackling the unsustainability of the construction industry which the World Green Building Council says is responsible for 39 per cent of the world’s carbon emissions.

Graduating last year with a Masters in Design Innovation and Technology, the 29-year-old’s multi-disciplinary designs were highly commended at the Victorian Premier’s Design Awards in March.

Recently, he was successful in securing a Design Strategy grant from the Alastair Swayn Foundation.

He also received one of eight Study Melbourne Future Founders Scholarships and is using the associated funding to put his prototypes through a range of tests. This will help him determine the most appropriate “recipe” to create a commercial product for the local construction industry. 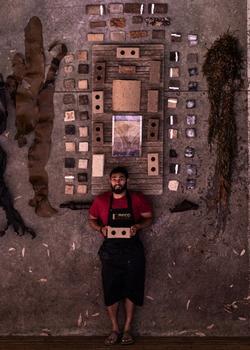 Study Melbourne Future Founders is Australia’s largest entrepreneurship program for international students. This year, scholarship recipients were awarded $10,000 in seed funding and support valued at up to $20,000, including coaching, mentoring and access to the StartSpace Loft facilities at the State Library of Victoria.

Shimroth’s longer-term plan is to develop environmentally friendly and cost-effective construction materials that can be produced at scale to replace artificial substances found in bricks, plasterboard and cement.

In the short-term, he needs to build a sustainable business as he further validates his products through research and laboratory testing.

“I will possibly start with insulation panels and interior wall panelling materials,” he says.

“I might also do more homeware-related products to draw attention to the concept and build up the brand.”

The pioneering materials are built using seaweed alginate but the potential of incorporating industrial hemp and waste construction material into the mix is also being explored.

“I am still trying to work out the best recipe to make it work,” Shimroth said.

“Combining the hemp with the seaweed could be a really good combination.”

Phycoforms products are potentially 100 percent biodegradable. The circularity of the process is what makes it a viable opportunity with waste such as coffee grinds, shellfish waste, paper and sawdust given a new life. 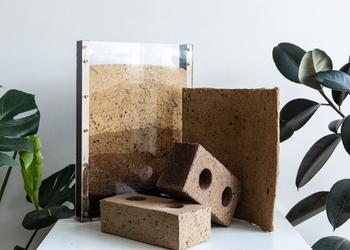 Successful testing of experiments with bioremediated seaweed could also unlock opportunities to clean up bayside councils which have large amounts of pollutants entering the ocean.

Australia’s fledgling seaweed industry is working on a blueprint to build a $1.5 billion industry by the middle of the decade and Phycoforms has been using B-grade harvest, or waste seaweed, that is unsuitable for use in higher-value products for the pharmaceutical, food or cosmetic industries.

Phycoforms has been in talks with local and interstate architects and the Museum of Old and New Art in Tasmania which is close to the seaweed farm that supplies the residue.

Shimroth is hoping to grow his company in Victoria.

“The Great Southern Reef is a prime seaweed growing area. There is a lot of potential for the seaweed industry to grow in Victoria,” says Shimroth.

“I am hoping that if I get support working with different organisations in Victoria, I will be able to make it happen here.”

“I know it’s possible. I need to get the funding and the resources in place to convince someone that Australia is the perfect place to do it because we have the right amount of seaweed to make it happen.”

Study Melbourne is a Victorian Government initiative, led by Global Victoria, which provides programs and services to support international students across their study journey and promotes Melbourne, Victoria as the world-class study destination.