Traditional art and storytelling have always been a part of life for Wurundjeri/Yorta Yorta artist, Simone Thomson.

“As far back as I can remember I have had a very cultural upbringing even though it was in an urban setting,” reflects Simone.

From the age of five, Simone started Aboriginal dancing, taking part in cultural activities and learning her traditional language from her grandmother.

“My memories always involve looking up to strong women. My mother and aunts were very powerful, they were warrior women who wanted to make a difference in the Aboriginal community to support the human rights of Aboriginal people,” said Simone.

“I was so fortunate to have those connections and those experiences throughout my life and to have such incredible role models.”

Simone says paying respect to her Elders and the generations before her, while retelling their stories is important to her and key to her art. 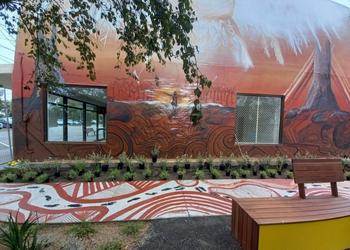 The central role that storytelling plays in Aboriginal art is captured in Dancing with Creation, a recent series of artworks that Simone, together with Gunnai/Gunditjmara/Yorta Yorta/Wiradjuri artist Robert Young, and Bunurong/Yorta Yorta artist Chris Hume created in the heart of the Ringwood East shopping centre.

The mural features the creator spirit Bunjil, scarred trees, a lone figure dancing the creation dance, and other Aboriginal cultural references which represent connection to Country.

“Storytelling through visuals like the mural is important as it gives non-Aboriginal people more of an understanding and a connection to the stories Aboriginal people have been taught about this land,” said Simone.

The footpath along Railway Ave was painted by Robert and Chris together with community members from Mullum Mullum Indigenous Gathering Place (MMIGP), who also painted planter boxes.

The project was a collaboration between MMIGP, Maroondah City Council and Ringwood East Traders, with support from the Victorian Government’s Neighbourhood Activity Centre Renewal Fund.

Dancing with Creation has transformed the local area and was officially opened with a Smoking Ceremony on 27 May to mark the beginning of National Reconciliation Week.

The event included traditional dance, music, and other activities.

As reflected on by Simone, it was a celebration that created a strong sense of community and pride.

“To see community there rallied around that space, Elders, children and the wider community, and to see the sense of pride on their faces as they took it all in, it was like we had a place, a gathering place, which felt very powerful,” said Simone.

Simone hopes that all visitors to the park can draw on that sense of connection for themselves and feel the same sense of pride when they take in the stories of Dancing with Creation.

“That day felt like it was the closing of the book for me – the story was complete, and it was the perfect way to recognise the importance of Aboriginal culture, community and connection to Country.”

To find out more about the mural and project visit Dancing with Creation - Maroondah City Council and the Neighbourhood Activity Centre Renewal Fund.