Mansfield’s Shannon Rademaker had little time to rest during the winter of 2021.

With a bulldozer, a pile of lumber, and a cohort of staff and volunteers, the mountain bike instructor and coach spent the months digging out trails and building new, improved ramps and jumps on his 700-hectare “Highline” mountain bike property. By November he had expanded the slope-style mountain bike circuit into a multi-discipline arena where riders can race through rugged downhill terrain or challenge themselves on platforms and jumps. 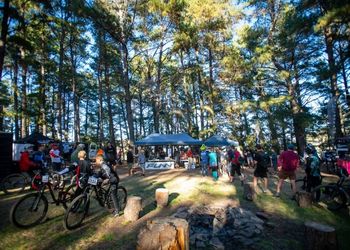 For the past four years Highline has hosted Australia’s only slopestyle mountain bike competition where riders are judged not on their speed but their ability to pull off tricks and turns with maximum wow effect. The event, recognised internationally for its toughness and stunning vistas, was recently included on the global competition circuit – the Freeride Mountain Bike World tour.

This year with a revamped arena, the competition has included improved gravity trails where riders take off from high elevation and, with the help of gravity, propel themselves downhill at intense speeds to the finish line.

Assisted by a Victorian Government Bushfire Recovery Local Community Projects Grant allocated through the Mansfield Shire Council, Shannon has turned the competition into a four-day festival experience, targeting up to 700 riders, 4000 spectators and plenty of social media coverage showcasing the region as a destination for both competitors and amateur enthusiasts.

“It’s like nothing else in Australia,” Shannon says. “By bringing freeride and gravity culture to one place, what we’ve created is really quite unique and world standard.”

Shannon, who competed internationally in his teens and early twenties, has watched in amazement as what was once considered an extreme sport outlier, entered the mainstream.

“It’s been incredible to see mountain biking become so accessible, and take off in the northern region,” he said.

“The culture of mountain biking is that events grow organically. Video clips travel fast on social media and word of mouth really gets people to the event.” 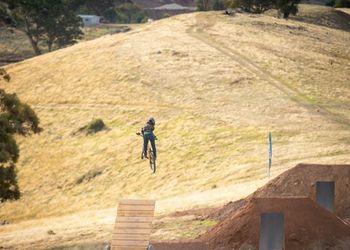 Of course, mountain bikers aren’t the only cyclists to appreciate Victoria’s High Country. Over the past decade a steadily increasing number of riders have been travelling to the area alone or in groups to make the most of its downhill slopes and hundreds of kilometres of road cycling routes.

The choices are many and diverse, from easy rides along the Great Victorian Rail Trail to off-road, gravel cycling.

“Many trails lead to breweries, wineries, sustainable farms or cafes, so there’s always a reward at the end of it,” says Gareth MacDonald, Mansfield Shire Council Economic Development Officer, Tourism and Events.

“It’s hard to find a destination without a bike-track out the back. Everyone thinks of Mansfield and skiing but in reality our summers are even bigger. And cycling is increasingly becoming a big part of this.

“In March there’s a biking event almost every weekend, culminating in Highline. This is really a massive event which will only see mountain biking in the region grow.”

One of the big appeals is that cycling is free, says Shannon. Compared to skiing, it can be more social and it’s cheaper to stay for longer.

“Mansfield is already known for its great products and activities like horse riding, fishing, water sports. Cycling adds to this. It broadens the demographic and gets people out into the region - into local accommodation, eating at local hotels and cafes, trying local products.”

Shannon has encouraged the Mansfield community to get involved in the Highline festival. His staff of 20 – along with a host of community volunteers - will be joined by local food vendors and bands.

“We’ve involved the local community as much as we can. I’m a big believer that when you live in a small town, using local products and people as much as possible creates a more sustainable economy, which benefits everyone.”