Many of Melbourne’s most loved gardens, cycling tracks and fishing spots were once quarries producing the materials that built the suburbs around them.

Not many Melbournians are probably aware that a few of the best-known parks in the city, such as Fitzroy Gardens and Albert Park Lake, were once quarries.

Other gardens such as Quarries Park in Clifton Hill and Ferntree Gully’s Quarry Reserve have a more obvious lineage. A new guide titled The New Lives of Old Quarries showcases examples of different developments that continue to add to the fabric of Melbourne and its suburbs. For fifty years or so, a quarry out the back of Cranbourne racecourse produced the sand that helped provide the concrete and cement to build the nearby sprawling suburbs. Fast-forward to the 21st Century, the Royal Botanic Gardens Cranbourne is an award-winning contemporary space like no other.

The quarry was once a key local employer. Today, Royal Botanic Gardens Cranbourne continues to support a wide variety of careers in both the day-to-day management of a visitor attraction but also as a Site of State significance for flora and fauna conservation.

Institute of Quarrying Australia President Shane Braddy says the industry is determined to put back something of value for communities and the state, leaving a lasting positive legacy for the areas that have supported quarrying.

“I’ve been working within the industry since the 1980s, I’ve seen active quarry sites change greatly over that time and many of them are now unrecognisable,” commented Shane.

"We can only extract the rock and sand once, whether it’s for the construction of roads, bridges, homes or hospitals, however we can leave behind some amazing community assets that become the centre of community activity." 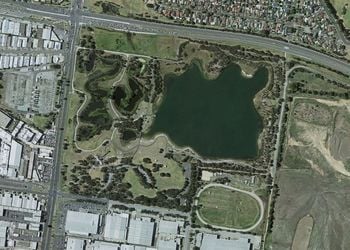 “One of the best projects I’ve had the pleasure to be involved with is Karkarook Park in Heatherton, a large site on the corner of Warrigal Road and what is now the Dingley bypass.”

“A former 40-hectare sand quarry is now a leisure and environmental haven that forms a key part of the area’s green wedge alongside residential, retail and business areas.”

“Along with the partners of that project, we were honoured to receive many awards for that work when the park opened in the early 2000s.”

Not many sites offer the community development opportunities of a rehabilitated quarry, the space and landscape potentially available means more can be done than with other former industrial sites.

In The New Lives of Old Quarries lakes feature strongly. The former quarry pit provides a great option for water and it’s the opportunities this provides that sees many of these sites, including Quarry Reserve in Ferntree Gully and Karkarook Park, on the must-visit list for anglers.

Victorian Fisheries Authority CEO Travis Dowling knows first-hand that former quarry sites make great fishing spots and many of them are on the list of locations stocked regularly with species such as rainbow trout, brown trout and golden perch.

“We stock many different waterways across Victoria but what’s special about the sites across Melbourne is that we do so with the specific aim of providing kids the perfect opportunity to catch their first fish,” said Travis.

“Metropolitan man-made lakes typically come with good access and transport options, well-designed fishing spots and with many of the former quarry sites, such as Valley Lake in Niddrie, their proximity to a large population make them perfect family fishing spots.”

“It’s great to be able to offer good quality inland fishing opportunities via these former quarry sites. Looking at the number of quarries on the outer areas of Melbourne, I think we will see future generations of anglers wetting a line at more places than we can today.”

Next time you’re having a picnic at a park or exploring on a bike, keep an eye out for any clues that you may be on former-quarry land, some of our industrial history might be right under your feet.