In a business planning session some years ago, Pepo Farms identified a hypothetical pandemic as a risk. The reality has seen it provide new outcomes.

“If you stare at a closed door for too long, you’ll miss the open doors behind you,” says Sharan West-Rivett, explaining Pepo Farm’s solutions-based approach to business. It’s a philosophy that has served her and her husband, Jay Rivett, well since they started working together in 2012.

Sharan is a third-generation pumpkin seed farmer, following in the footsteps of her father and grandfather in Slovenia. Despite her farming heritage, Sharan admits there were challenges when she and Jay started working in the industry from their farm at Ovens in Victoria’s North East. “We were, and as far as I know still are, the only edible-pumpkin seed farmers in Australia,” she says.

“When we started there was no research or experience or equipment which we could work off.”

Their early harvests were hand-picked, the pumpkins split open with a machete, and seeds scooped out by hand. The first piece of machinery the farm acquired was a vacuum cleaner bought to suck out the seeds.

Today Pepo Farms has a purpose-built harvester imported from Austria. The machine harvests the pumpkins, separates the seeds and discards the pumpkin. The seeds are then washed, dried and kept in cold storage.

For most Australians, the closest they get to pumpkin seeds are pepitas, a Chinese import used in breads and health foods. Pepitas are kernels derived from the seeds of a normal eating pumpkin once the fibrous husk is removed.

The pumpkin seeds Pepo Farms produce have no husk and are edible as is. They’re healthier and usually tastier, particularly when salted or covered in chocolate.

While new to Australia, the pumpkin seed industry is worth hundreds of millions of dollars in Europe where the seeds are prized for eating and for pressing into rich, healthy oils. At Pepo Farms, a large portion of the harvest is pressed using a traditional oil mill and the remnant compressed dry matter is ground into flour. Products are sold across the counter and through 800 supermarkets, restaurants and health food stores throughout Australia.

Over the years, Sharan and Jay have expanded their offerings, sourcing seeds and nuts from local farmers. They have opened their mill to other small businesses, processing the raw materials for them and providing sustainable farming communities with an alternative product and income. But in early 2020, business conditions changed.

“We had experienced five years of strong growth, taking on more farms, growing our production capabilities and expanding product lines, when the pandemic hit,” Sharan says.

“Not only did we have to close the shop, which was about a third of our sales, many of our wholesale customers were affected as well.”

“We managed to keep on all our staff with the help of government grants,” notes Sharan.

This included the first round of JobKeeper funding and a grant through Agriculture Victoria’s Resilience and Recovery Program which helped to redevelop workspace so manufacturing staff could work in a COVIDSafe environment.

“What we really had to rethink was how we engaged with customers and got our product out to them,” she adds.

Somewhat fortuitously, after the bushfires 12 months prior, Sharan and Jay had upgraded the business’s online shopping platform. With the onset of COVID-19 they began increasing the farms digital presence.

“We focused on really communicating with people. We began regularly updating the front page of our website and Facebook page so people knew we were still open,” Sharan says. 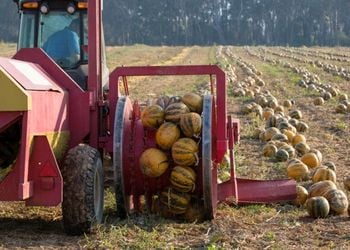 “We also increased our use of social media, especially Instagram. We’d post photos and video stories, to keep in touch with people, things like sunflowers to keep up staff and customer morale.

“Customers would call frustrated, not necessarily with us but with the hold-ups to deliveries. We’d take the opportunity to empathise with them.”

By taking a proactive stance and persevering, Pepo Farms discovered their market was actually starting to grow.

“We found demographics had shifted, we were getting younger customers who were becoming more comfortable about buying artisan food products online. Locked down, people began taking a greater interest in cooking, they were looking for local produce and healthy alternatives – this certainly helped increase sales.”

Pepo Farms engaged with new customers, forging and strengthening these relationships by posting new recipes on its website and releasing regular newsletters.

“Maintaining this humanistic side during COVID-19 really helped us move through the challenges thrown at us,” Sharan says.

''We’re not just an Australian pumpkin seed company, we’re Pepo Farms. It’s important for us to nurture relationships, whether it’s with customers, local suppliers or our staff who have been a key factor to our success.

“The products sell, but we need people to produce the products and get them to the customers.

“Ultimately it’s the human relationships which are important.”

Kamal Grewal, Manjinder Grewal, Aman Grewal.
10 people gathered around in a circle amongst farm land listening to the person with a red hat.
Photo of Del Delpitiya with farm in the background