Researchers at Agriculture Victoria’s Tatura SmartFarm discovered how much light is needed by blush pears to produce their red colour, which is favoured by premium markets overseas.

In an orchard in Victoria’s Goulburn Valley, Agriculture Victoria scientists have given pears a reason to blush.

Understanding how colour develops in blush pears is important because if they don’t have enough blush, or the colour is not intense enough, they won’t fetch premium prices – particularly from South East Asian markets that favour pears with a red blush. 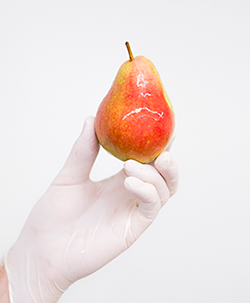 Victoria is the largest pear producer in Australia and scientists are using cutting-edge technology and advanced management systems in the orchard at Agriculture Victoria’s Tatura SmartFarm to ensure growers’ businesses are backed up by research.

About 90 per cent of Australia’s pears are grown in Victoria and in 2018-19 the gross value of fruit and nut production was $1.4 billion, while fruit and nut exports during the same year were worth $1.35 billion.

Pears are often managed in a similar way to apples, however, compared to apples and other fruits, little is known about how the red colour in blush pears develops, hampering growers’ efforts to control when the colour forms, affecting their potential to sell their fruit to lucrative markets.

Agriculture Victoria Research Scientist Dr Ian Goodwin is part of a team that has been working to solve this problem at the Tatura SmartFarm.

“We focused on the seasonal patterns of colour development in two pear cultivars previously bred at the SmartFarm that are marketed as Rico® and Lanya®,” he said. “We found shade caused the pears to lose colour very quickly, but if they were re-exposed to sunlight the pears’ colour could quickly be recovered.”

As to taste and texture, Rico® can be eaten as a crisp pear or allowed to ripen after several days at room temperature to produce a melting flesh that is sweet and nutritious. It has a long storage life making it suitable for consumption in overseas markets throughout most of the year. Lanya® is a crisp, fresh pear that is both tasty and juicy.

Dr Goodwin’s study was part of the Horticulture Development Plan funded by the Victorian Government’s Agriculture Infrastructure and Jobs Fund.

The findings of the research can be found on the PubMed.gov website.