The design partnership was formed in 2019 to ensure Dja Dja Wurrung stories and culture are represented throughout the building.

“When First Nations Peoples’ culture can be usefully applied in a modern context, it creates a degree of pride for us,” says Dja Dja Wurrung Group CEO, Rodney Carter. “But what it also does with major projects, is it now puts us on a form of stage and presence that others can enjoy and appreciate and learn from.”

“Through collaboration, the best of both Indigenous and Western design principles have been incorporated into this state-of-the-art building. The design aims to instil a sense of shared responsibility for the future,” says Development Victoria’s Design Manager for this aspect of the project, Nina Michaelides.

Traditional Owner groups include DJAARA, and its business arm DJANDAK, which supported legal agreements for protecting Indigenous cultural and intellectual property rights for the commissioned artworks.

A specially formed Dja Dja Wurrung guidance group called a Wartaka was also established to direct the building’s cultural design concept. A Wartaka, meaning “come together with purpose”, is made up of Elders and knowledge holders.

Hannah Burrell, Galkangu’s design project manager for DJANDAK, explains. “The cultural design direction for the building’s artworks and narratives included guidance on which materials to use, and what they represent, and what’s culturally appropriate to share. They also suggested how the project could create employment opportunities for Indigenous people.”

Hannah sees the process and outcomes as a celebration. “Cultural expressions including art, design, language and narratives embedded in the architecture at Galkangu celebrate the strength and resilience of Dja Dja Wurrung people,” she says. “The collaboration and design outcomes are strengthening the visible presence of cultural values, lore and layers of Country that have always been here.

It’s a first step towards imagining what a built landscape could be if Traditional Owners are holistically guiding the healing of Dja Dja Wurrung Country, she says.”

Speaking for the team, Nina is also proud of the process. “We hope that this project will set a benchmark in best practice Traditional Owner partnership, co-design and Indigenous placemaking,” she says.

Design elements that feature in Galkangu 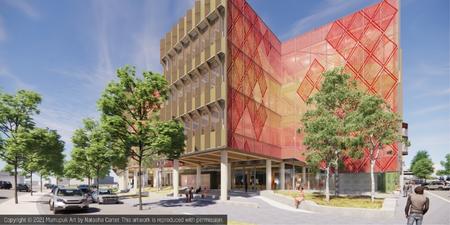 The most visible element is the three-storey-high frit patterned glass facade artwork.

Dja Dja Wurrung, Yorta Yorta and Jaru artist Natasha Carter explains, “There’s two artworks - Giramal and Buri-Gutang Djaa. Giramal means shield. The shield design and the diamond motif represent honour, protection and identity. Buri-Gutang Djaa means journey or travel across country. Every day we’re travelling across Country. Not just my people but everybody. When we do that, we must walk lightly and protect the land that we’re on.”

Language helps us understand the world around us. It contains complex understandings and connections that resonate with a sense of integrity, purpose and place.

The name Galkangu symbolises joint management, making things happen together and being more connected to Country. Spaces throughout Galkangu will have Dja Dja Wurrung names and interpretation.

The forecourt features a seamline between bluestone and granite. The bluestone references the region’s history of mining bluestone, quartz and gold which was devastating to Country. While granite is found naturally around Bendigo.

“The seamline represents two perspectives in the governance of Country and the reconciliation journey ahead, of two cultures coming together,” says Hannah .

The landscaping includes a planting palette of the pre-colonial box ironbark forest that would have stood on the site. It also includes a diverse all-native planting to create a layered meaning and sensory experience. Edible, medicinal, aromatic, fruiting and flowering plants are all included, symbolising the importance of keeping Country healthy.

There’s a gathering and conversation place made from granite boulders, mostly at seat height, placed in a rough circle, which may be used for smoking ceremonies.

A water feature signifies the importance of passing on healthy and clean water, while the sounds of running water create a space of reflection and healing.