The small Baw Baw community of Rawson has been the driving force behind a new skate park that local kids and visitors to the region will love.

The idea of a skate park at Rawson (population around 300) isn’t new. It has been a topic of discussion in the picturesque mountain town on and off for years. Now, thanks to a collaboration between local community members, the Baw Baw Shire Council and the Victorian Government, the park has become a reality, giving local kids a place they can flip, grind and slide.

It’s also another reason for visitors to Mt Baw Baw or Walhalla to make a Rawson pitstop last a little longer. The Rawson Skate Park and RV Parking officially opened on Monday 6 December 2021. But the community has been using it for weeks.

Jamieson Asbock, who grew up in Rawson and now lives in nearby Newborough, is part of the committee that helped deliver it. While his serious skateboarding days are behind him, Jamieson and other local residents got involved because they believed the skate park - and the adjoining space for recreational vehicle (RV) parking - would be great for the town.

“Obviously, it’s hugely important for the kids. It gives them something to do after school and a place to hang out together. But it will be positive for the whole community, including more money for the local shops,” says Jamieson.

He says the community worked with Baw Baw Shire Council and the designers on the park’s layout and location.

“We provided them with a sense of what we wanted. We didn’t want a park that was too hard for beginners but definitely not too easy either, as that would get boring pretty quickly for the kids.

“They gave us three different design concepts. We went through them as a group and highlighted the best features and what we wanted. “We also did a walk around all the possible locations and it’s been built at our favoured spot – next door to the shops, so the kids don’t have to cross a main road to buy a drink or something to eat, and it’s also near the police station.”

The result is a park that offers challenges for skaters of all skill levels, as well as those on scooters and BMXs. A basketball court, tennis hit up wall, kickabout space, picnic tables and shelters give it even broader appeal to the local community and visitors.

The Victorian Government has invested $320,000 from the Regional Infrastructure Fund in the project. The fund is for infrastructure projects that boost Victoria’s rural and regional economies and support community activity. Baw Baw Shire Council provided $160,000 to the project.

Not surprisingly, the opening of the new skate park has seen a lot of kids living in and near Rawson getting new skateboards and scooters. 17-year-old Carmen Schembri is one of them. She is loving the skate park and visits often with her new scooter, or her sister’s new skateboard (it’s okay. They have an arrangement).

“I’m really enjoying the skate park,” she says. “I ride around there, hang out with my friends - we chat and catch up – it’s really fun!”

“At the moment I’m just using my scooter. My skills are improving. There’s part of the jump called the box. You’re supposed to clear it and I have just managed to do it!” 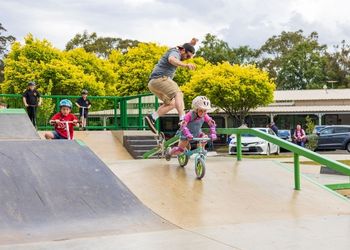 Carmen, who lives one minute from the park, and her friends are happy with the new facility’s location.

“Having the shops close is really good. My friends and I will go there, get fish and chips and eat that together.”

Although Carmen isn’t into basketball, she says many others are enjoying the free-throw court that’s also part of the park.

One of them is four-year-old Kash, who plans to take his new basketball and his Dad to the park for some fun. He is also very excited about riding around the skate park.

“I’ll do some jumps,” he says. “I’m going to go to the side and I’m gonna ride a scooter!” He isn’t so sure about skateboarding though “cos I don’t know how to ride one yet and I can only go slow.”

“I really like it. Everyone gets along. It’s definitely a great place to hang out and talk to people.”

And in more good news for the kids of Rawson and nearby Erica, the local council is organising free learn-to-skate sessions to celebrate the park’s opening. Check out the Baw Baw Shire Council Facebook page and Latrobe Street games Facebook page for details.