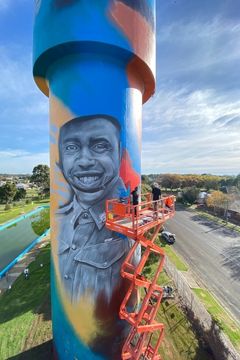 After 20 long years, a dream to recognise his great grandfather, Frederick Amos Lovett, has become a 30-metre-high reality for Troy Lovett.

“Family members in Heywood had an idea to use the sky-high water tower as a canvas to remember the Lovett family who fought in both world wars,” Troy said.

“To now see this tower transform into a huge Indigenous war memorial mural, it’s something I could only dream of.”

Located in south-west Victoria, the water tower is the main focal point in Heywood, originally used to supply the town’s water. It now proudly acknowledges the sacrifices made by Gunditjmara servicemen and women. It’s a significant moment after thousands of Aboriginal Australians were denied their entitlements and recognition when they returned from war. 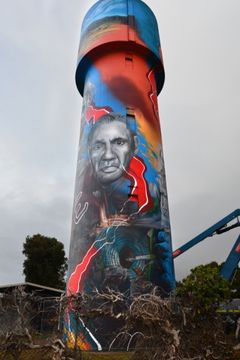 The mural shows Gunditjmara brothers, Privates Herbert, Frederick, Edward and Leonard Lovett who enlisted and served in the first and second world wars. The brothers were part of 13 members of the Lovett family who proudly served their country. Captain Reginald Saunders also features in the artwork. A Purnim man, Reginald Saunders was the first Aboriginal Australian to be commissioned as an officer in the Australian Army.

“When I was younger driving home, I would see the water tower coming up and knew I was nearing my house,” Troy said.

“Now it’s a reminder of my family and the courage they had in the war.”

Troy became involved with the Leadership Great South Coast Program in 2020 and took the first step to turn an idea into a reality. Leading local initiatives, the group can choose a community project to focus on each year. Troy was inspired by seeing the artwork from Victoria’s Silo Art Trail which gave him the idea to do something similar for the water tower.

“We really wanted our artist to paint something magical again and after an expressions of interest process, Matt stood out as the perfect choice,” Troy said. The 18-month water tower art project provided an opportunity to bring on local artist, Levi Geebung. Mentored by Adnate, this project allowed Levi to incorporate his style and share his knowledge of art, culture and land within the Maar nation. Levi started painting in 2012 after reconnecting with his father in South Australia, artist Stanley Geebung.

Levi’s father was part of the Stolen Generation, born on Augathella Mission in south-west Queensland. At age five, he was removed 1,700 kilometres from his country to an orphanage in Rockhampton. This resulted in Stanley Geebung feeling a huge disconnection from his culture.

“I started painting on canvases of every size and after learning the skills from my father, I just knew this was the course I wanted in life,” Levi said.

Levi was born in Warrnambool and raised in Koroit on Gunditjmara country. His heritage stems from Bidjara country, 12 hours south-west of Brisbane, Queensland.

He was excited to work on his first mural – the biggest project he’s been involved in.

For Levi to be invited to paint such a significant story of Gunditjmara on Gunditjmara country is the highest compliment as it shows acceptance from all Traditional Owners.

“I’m an example of an Aboriginal kid born on Country of which they’re not from but it’s still home for them.

“And for some, it’s the only Country they know and have connection with,” Levi said.

“I’m a proud Bidjara-Gunditjmara man and this project highlights how much it makes up a large part of my identity,” he said.

Bringing the water tower to life Another local artist, Tom Day, the great grandson of Herbert Stahle Lovett returned home to Gunditjmara Country to help paint the mural featuring his great grandfather. He joined Matt, fellow artist Campbell Roberts and Levi to add his style to the project.  His contribution changed the grey water tower into a colourful reflection of the area’s volcanic past featuring a lava flow design recognising nearby Budj Bim volcano. He now lives in Shepparton as an accomplished artist.

“Tom’s really good and his detail is amazing,” Troy said of his cousin.

Leaving the art to his cousin, Troy focuses more on digital prints and works in Aboriginal community service, engaging with the community and supporting their needs. He moved away for a period but always knew he would come back and settle in Heywood.

As the tower was changing, Heywood was also going through its own changes, with businesses upgrading their signage, new life was breathed into the town.

“My 11-year-old boy loves seeing his great-great-grandfather up there and we’ve received some messages from relatives and Aunties too. 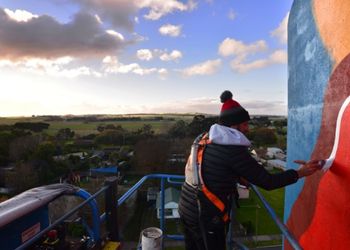 “It’s pretty special to be able to recognise our family’s contribution and have them always looking over us,” Troy said.

“It really is a dream come true.”

Initiated by the Leadership Great South Coast 2020 Alumni (Troy Lovett, Emily Falla, Craig Kelson and Jason Van Der Heyden), the project was supported by the Victorian Government as part of the Stronger Regional Communities Program along with further support from the Gunditj Mirring Traditional Owners Aboriginal Corporation, Wannon Water, Glenelg Shire and the many local businesses that donated goods and services.

Emma Bamblett and Megan Van Den Berg
And then we fell in love, Dr Craig Mitchell
Kathrin Longhurst with her portrait of Kate Ceberano