Victoria has strengthened its reputation as a leading centre for clinical excellence and medical research after Melbourne company Nucleus Network was chosen to run world-first clinical trials for a coronavirus vaccine. The trial is the first critical step towards creating a potential vaccine that is safe and able to be accelerated into the next phase of development.

Led by principal investigator and medical director Dr Paul Griffin, an infectious diseases physician and microbiologist, the phase one clinical trial is the first human trial in the southern hemisphere and one of a handful of coronavirus human trials worldwide.

The trial aims to confirm the safety of the NVX CoV2373, a SARS-CoV-2 Recombinant Spike Protein Nanoparticle vaccine.

It also will seek early results on whether the vaccine is likely to generate the immune response required to protect people who are exposed to coronavirus.

Dr Griffin said the vaccine would be injected into 131 participants, aged 18 to 59 years, split across the company’s purpose-built Melbourne and Brisbane clinics.

“Nucleus Network is a Victorian company that’s been around for a long time and has a long track record of doing these studies really successfully,” Paul said.

“Our main site in Melbourne is right near the Alfred and part of the Burnet Institute. It is co-located with a first-class health facility, a first-class research facility and has access to amazing scientific services.

“Being such a big city, we also have access to a large number of eligible volunteers. Clinical research doesn’t progress unless we have a pool of eligible and willing volunteers to participate.” 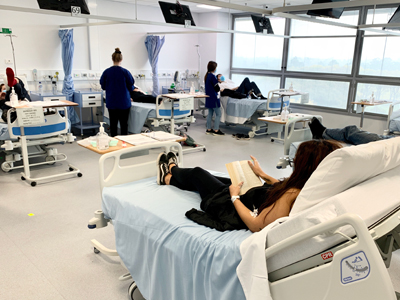 Nucleus Network conducts phase one clinical trials with biotechnology and pharmaceutical companies to accelerate drug development, develop new medicines, and determine drug safety for global companies around the world. It is the largest and most internationally experienced phase one clinical research facility in Australia.

It was chosen to conduct the phase one vaccine trial on behalf of Novavax, Inc, the US-based biotech company which developed NVX-CoV2373, and sponsor of the trial, with funding support from the Norway-based Coalition for Epidemic Preparedness Innovations.

“Phase one clinical trials is a competitive landscape; it requires a very special set of skills and lots of expertise and places are chosen on their merits,” Paul said.
“It’s a big positive that Melbourne was chosen to be the site for this and given the attention around this vaccine and development, I think this is something that will draw attention to phase one trial and clinical research both for Melbourne and for Nucleus Network.

“We are a very good, highly sought-after unit. There is a very large team working on this and we have a strong track record as an organisation. We can’t wait to proceed and hopefully support the development of a vaccine for COVID-19.”

The first phase of the trial began in late May with early results expected by the end of July. Based on the results, the vaccine will then move to phase two and three clinical trials.

“There has been very supportive pre-clinical data and that’s made us confident of its safety and its efficacy; we wouldn’t progress to clinical trials without that,” Paul said. “It makes us cautiously optimistic.”

Novavax expects to have 100 million doses of the vaccine available for use by the end of the year.