In the lead up to International Women’s Day on 8 March, we spoke with Victoria’s 29th Governor, Her Excellency the Honourable Linda Dessau AC – the first woman to step into the role. How do you feel about becoming Victoria's first woman Governor, taking on the role in July 2015?

"Like most women who are the first or amongst the first into a particular role, I feel a degree of pride for breaking new ground. I also feel a sense of responsibility to work in a way that will hopefully inspire or encourage other women to step into their own new and challenging roles. But above all, I hope the day will rapidly arrive when it’s unremarkable for a woman to step into any role of any sort, anywhere in our state. When there’s no new ground to break. We all know we’re not there yet."

Which mentors have helped you in your career?

"I’ve encountered terrific mentors, both men and women. Not all in law. And not necessarily senior to me. I think that if you’re curious, you’ll see and meet people whom you want to emulate from all different perspectives. Sometimes, it’s their leadership. Sometimes, it’s how they think or how they write. Sometimes, you might just watch how they handle complex situations. Perhaps they are more influencers than mentors as such. In terms of pure mentoring, various people have given me advice or opportunities at different points. I have been grateful, but I wouldn’t claim one particular person as a mentor." 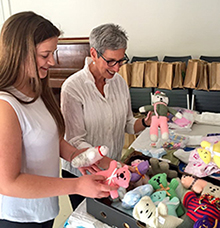 How important is it to host Victorian community events which focus on diversity and inclusion?

"Quite simply, I think diversity and inclusion are essential when hosting Victorian community events – as they are in every endeavour throughout the state. Every event, every business, institution or community group, and every idea or decision is the richer for the expression of different perspectives. And we’re all the stronger when we each have a genuine sense of belonging."

Let’s touch on the human impact of your work as the Governor – for instance, your recent role visiting bushfire-affected areas on the 10th anniversary of the 2009 Victorian bushfires.

"When I was a new lawyer, some years ago now, I recall the Chief Justice of the day reminding us – as he put it – that at the end of every letter or file or document drafted, there was a human being and a human problem. He was counselling us never to forget the human side of what we do. I’ve seen that in every role that I’ve held.

"As the Governor, I’m conscious that the people of Victoria are central to everything that I do, whether in my constitutional duties, on important ceremonial occasions like ANZAC Day, or in the promotion of Victoria’s industry, achievement, social harmony and global connections.

"The time that I just spent, with my husband, touring affected areas and talking with the local communities, as the Patron of the Tenth Anniversary of the 2009 Victorian Bushfires, ensured that the human impact of those fires was always to the fore. No one has forgotten the tragic losses suffered by individuals, families and communities. But nor has anyone forgotten the heroism and the kindness of so many people during and in the immediate aftermath of the fires. And the stoicism and resilience of those who worked tirelessly to rebuild their homes, their lives and their communities."

Read more about the Governor's role, events and Government House via the Governor of Victoria website.