If you’ve ever imagined what it would be like to jet off to the moon, NASA’s Dr Darlene Lim is the ideal person to talk with. She’s preparing astronauts for space colonisation, and potentially much further down the track, regular folk too. And it just so happens that Darlene is in Victoria to conduct a series of talks for the 21st annual National Science Week, on between 10-18 August.

The 47-year-old Canadian geologist and submarine pilot is based at NASA’s Ames Research Centre in California’s Silicon Valley. She leads research missions to some of the most uninhabitable spots on Earth: a 120-metre high volcanic crater in Hawaii Volcanoes National Park, piloting submersibles (underwater vessels) and deep diving on reefs in the Florida Keys, and braving ice storms in the Arctic and Antarctic.

Her goal is to uncover vital clues about the conditions human explorers might face on other planets, as there could potentially be a connection with the most extreme environments on Earth and the landscape and atmosphere of planets elsewhere. Mars, for example, is covered in basaltic rock and basalt on Earth contains chemicals that could potentially grow bacteria – the most basic form of life.

If life can thrive (or has thrived in the past) in the most barren regions here on Earth, could life exist on Mars? Darlene and her team are tackling that very question through what’s called analog research. "Analog research refers to a place on Earth that allows researchers to approximate physical conditions on other planetary bodies and in deep space," she explains.

"Over the past decade, NASA teams have been working at analogs – destinations on Earth that simulate Mars mission conditions – to build capabilities for human and human-robotic missions to the moon, into deep space, and on Mars." 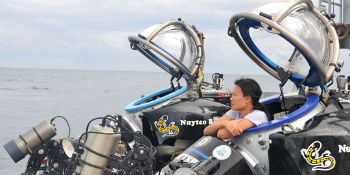 Darlene’s teams’ research is helping uncover the similarities between Earth and places such as Mars using landscape satellite images for comparison.

Exactly when humans will head to Mars and beyond is still unclear, yet Darlene envisages we’ll see civilian flights to Mars in this lifetime.

"A human journey to Mars has long been imagined and immortalised in our collective cultural psyche by poets, writers, scientists, and technologists," she states. "Since the Viking Missions, [a NASA program where two American space probes landed on Mars in 1976], this momentous event has always been an elusive 30 to 35 years into the future. However, we find that a steep inflection in the rate of technological advancement is being met by a broad array of foundational space science and planetary research – a confluence that will optimistically serve to accelerate our path toward human exploration of Mars."

So much so that in the next decade, predicts Darlene, we’ll see humans push deeper into space – back to the Moon in 2024 and onwards. "Landing humans on Mars is being examined by multiple agencies, commercial entities and organisations around the world, with an eye to landings in the next 20 years: I look forward to seeing first landings in my lifetime," she says.

When she’s not trekking to far flung destinations on Earth for space research, you’ll find Darlene promoting STEM education; she’s the founder of the Haven House Family Shelter STEM Explorers' Speakers Series, which brings NASA and academic researchers to homeless children in San Francisco’s Bay Area. "Celebration and promotion of science and discovery is such an important and impactful endeavour and being a part of this effort is such a privilege," she enthuses.

Her own intense passion for science and exploration developed as a child when she was trekking the Canadian Rockies, reading up on Amelia Earhart and watching "inspiring" documentaries by French underwater explorer, Jacques Cousteau. Darlene’s tip for Victorian scientists who are interested in being a part of the space research opportunities is don’t be shy: actively seek out research partnerships both here and abroad.

"In terms of Mars science and exploration, collaboration is a must for researchers around the world," she says. "Funding’s always limited, but there are creative ways to 'stretch a dollar' that involve multi-faceted partnerships with researchers around the world who can bring additional support. I’ve had several colleagues work closely with Australian researchers in astrobiology, comparative planetology and human exploration. Continuing these collaborative efforts will benefit not only Victorian scientists, but the space science and exploration community in general."

Darlene Lim is a guest speaker at a number of Victorian events during National Science Week, including Science in the Park in Somers, an intimate talk at Mornington Library, and for more on Mars, she is presenting Frontiers of Science: Mars and Beyond at Scienceworks.

More details can be found on the website of the Royal Society of Victoria.