WATCH THE VIDEO: The new and improved Australian Centre for the Moving Image (ACMI) at Federation Square is now open. Take our tour. In just two decades, ACMI has morphed from an idea to “the most visited museum of screen culture in the world”, notes its CEO and director, Katrina Sedgwick.

But it was no time to rest on its laurels.  So, over the last five years ACMI’s gone through a $40 million redevelopment, which should see it remain the leader in its field for years to come.

The jewel in the crown of the new ACMI is The Story of the Moving Image, an exhibition taking you into the past, present and future of the moving image.

It’s a cinematic treasure trove for all ages. 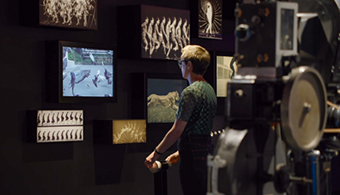 Included, among thousands of items, are vintage movie cameras, snippets from famous Australian and international movies, the piano used in the 1993 Jane Campion-directed film of the same name, digitised home movies from the 1930s, and hammered steel armour from ‘True History of the Kelly Gang’ (2019).

For motor buffs, half of the Ford Falcon V8 used in George Miller’s Mad Max ‘Interceptor’ movie is melded with half of a car from the documentary series, ‘Bush Mechanics’, which trails a group of Indigenous men from Yuendumu fixing cars in inventive ways in Central Australia.

And for hands on fun, there’s flip books, retro video games plus a Foley studio (where you can hear, for instance, how the sound of frying bacon is used in films, TV shows and videogames to recreate the sound of rain on a roof, and how crumpled celluloid is used to replicate the sound of walking on a forest floor).

So, what are you waiting for? Next time you’re in the CBD, make sure you pop in.

For opening hours and to book a free ticketed session time, go to acmi.net.au.