Part of Melbourne’s cultural identity for over half a century, Carlton’s beloved La Mama Theatre will re-open in February 2021.

In May 2018, Australia’s theatre community was rocked when La Mama was engulfed in flames early one morning, triggered by an electrical fault.

In the space of a few short hours, the 1883 red brick, not-for-profit theatre operating since 1967 was decimated. 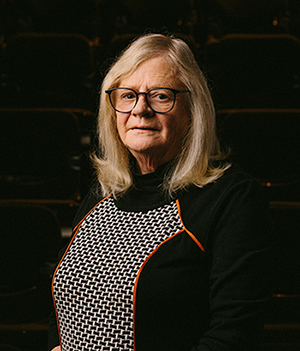 But like the proverbial phoenix rising from the ashes, the heritage-listed former lingerie and shirt factory on Faraday Street will reopen in 2021 thanks to a $3.1 million rebuild led by Caitlin Dullard, La Mama’s Co-CEO and architect Meg White, a former La Mama performer and set designer.

Liz Jones, Co-CEO and La Mama’s Creative Director since 1973 (and something of a cultural icon herself, having received a 2012 Order of Australia and a 2002 Victorian Honour Roll of Women inductee for her work in the arts), was one of the first on the scene that fateful morning when the fire took hold.

“I was woken by a 6am phone call from fire brigade telling me the theatre was on fire,” she says. “So I jumped in my car, heart pounding as you can imagine, and drove as fast as I could to La Mama. I arrived 30 minutes later to an inferno. I rang a couple of people who rang a couple of people and by 9am, there was this wonderful group of supporters on site. At 11am, we were joined by the Minister for Creative Industries. Everyone, including the minister, stayed there with us until the fire was under control. Some people were taken up in a crane and lowered down inside the building to assess the damage, but I was much too nervous to get in that little cart!”

Despite the efforts of 50 firefighters, the building was destroyed, leaving only the four external brick walls intact. 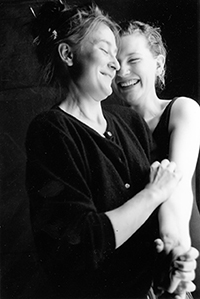 “I was gutted,” concedes Liz, recalling how many established Australian theatre, film, television and comedy artists “got their start” within those very walls. Writers “David Williamson, Christos Tsiolkas and Patricia Cornelius had early plays here, and in terms of people who have created their own personal performance style, Julia Zemiro, Judith Lucy and Nicola Gunn all worked here extensively. Judith Lucy wrote and performed ‘No Waiter, I Ordered the Avocado’ in 1991, which was directed by Andrew Upton, Cate Blanchett’s husband, and of course, Cate herself performed at La Mama in 1998 and in 1989 with Caroline Lee, who is now one of our board members.”

Community support was immediate in the fire aftermath, according to Liz. “The first major donation came from the Victorian Government, $1 million, which ignited the philanthropic community in a wonderful way. Just over $3 million was needed for the rebuild and we reached our target a few weeks ago. The downstairs space will be restored, and upstairs will have a rehearsal space and a proper office – something we’ve never had before.”

Complementing the “old” La Mama, a new building will nestle in front of the rebuilt theatre, delivering a rehearsal space and facilities for artists, staff and audiences. The project will also improve accessibility across the whole site and incorporate solar panels, a water tank and double-glazing for sustainability. 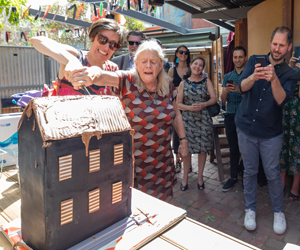 The late Betty Burstall, founder of La Mama, would no doubt be chuffed her legacy will live on. Betty decided to open La Mama after living for several years in New York City where she had become an ardent fan of Greenwich Village’s burgeoning “coffee house theatre”. It was high time, she figured, that Melbourne got a taste of the same stimulating, independent, experimental, culturally-inclusive, intimate space where poets, musicians, actors and playwrights could test out new ideas with the audience only metres away.

“Betty envisaged the theatre to be reminiscent of New York’s off-Broadway coffee scene,” adds Liz, where the crowd could sip a cuppa and have a chat with performers after a show.

Tickets to the first performance in 1967 went on sale – for 50 cents! – and contemporary theatre in Melbourne took off.

“It has developed exponentially since then,” says Liz. “There were no theatre schools when I was going to university and yet theatre is so important as it nurtures the grass roots of creativity in communities. La Mama’s the most inspirational company and we’re now a lively player on the world stage.”

La Mama Theatre is expected to once again welcome audiences to its Faraday Street headquarters in 2021 with performances continuing at the La Mama Courthouse and other venues in the interim. Follow the progress of the theatre’s rebuild online.