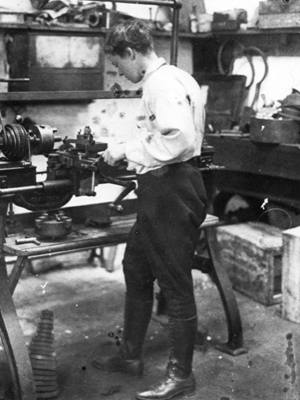 Honouring that achievement, Alice has been recognised by the Victorian Government. She was inducted into the 2020 Victorian Honour Roll of Women and this year LaunchVic opened a $10 million Alice Anderson Sidecar fund, co-investing between $50,000 and $300,000 into women-led start-ups.

It’s a fitting tribute to a woman with a remarkable backstory.

While her name doesn’t ring many bells today, Alice Anderson (1897 to 1926) was quite a celebrity in the Roaring Twenties, renowned for her entrepreneurial smarts.

“Alice was a household name before she died suddenly in 1926 aged just 29,” says historian, Loretta Smith, who has published a biography on Alice, A Spanner in the Works. “Her unexpected death was front page news in every major paper in the country and she was deeply mourned. A few decades later she was barely remembered.”

As with many women throughout history who have achieved remarkable things, they are usually not the ones who write the history, Loretta observes. “Men have often taken the credit for women’s achievements and often written them out of the history books as if their extraordinary lives had never existed. That’s why I chose to write her biography – to put Alice back on the map, to be recognised as the pioneering woman she was.” That pioneering spirit was clear when Alice was a teenager.

After learning to drive in her teens at her father’s transport service in Healesville and discovering a serious passion for cars, Alice apprenticed with a Melbourne mechanic and became an expert in how to strip and restore engines.

Apprenticeship complete, 22-year-old Alice bought a block of land across the road from where she was boarding and opened her own purpose-built all-female enterprise, The Kew Garage, apprenticing nine staff. The garage not only repaired cars, but also sold petrol, operated a driving school, and offered a 24-hour chauffeur service.

Despite rumblings from other Melbourne garages who didn’t want a woman on their turf stealing work, Alice built many lucrative connections and her business took off.

Chauffeuring proved profitable and before long, Alice was training more than 30 female chauffeurs to work from her garage. When she wasn’t fixing cars or pumping gas, Alice also took on chauffeur jobs for wealthy households including politicians, newspaper magnates, financiers, stock and station agents, and sheep graziers.

A sense of adventure coloured every aspect of Alice’s short life.

Some driving assignments saw her taking touring parties through remote stretches of South Australia, New South Wales and Tasmania, organising every aspect of each trip including meals and accommodation.

And for fun, she once donned driving goggles and embarked on a 2607-kilometre, three-week journey to Alice Springs through the desert in a 1926 Baby Austin. “After nine years running her garage around the clock, this was her idea of a holiday,” laughs Loretta, who says Alice bought the vehicle with the view of promoting it as the smallest manufactured car at the time to try to reach the heart of inland Australia. “Forever the entrepreneur, she gained publicity and sponsorship from an Austin car dealer and an oil company in return for sending regular telegrams of their progress. Fortunately, Alice and the Austin came through with flying colours though the arduous trip was too much for Jessie Webb (Alice’s former teacher), who abandoned Alice and the Austin in Oodnadatta for the train home instead.”

That pioneering attitude also saw Alice invent one business product that could have made a lot of money, if only she had patented it globally instead of just patenting it in Australia and allowing the patent to lapse.

“Had Alice taken out an international patent on her ‘Get-Out-and-Get-Under’,” says Loretta, “the under-car trolley she designed and built in 1918, to work on car engines, would not have been stolen by an American businessman, who took the idea back to the States and marketed it as the ‘Creeper’ – used to this day by almost every car mechanic around the world.”

Alice’s life story cries out to be told on the screen. “I’m in negotiations with a major production company for a television series based on my biography about Alice,” divulges Loretta with a smile.

The business of networking Alice moved in the same circles as quite a few high-profile individuals, many of whom became Kew Garage clients.

Her first encounters with well-known individuals were through her family.

Alice’s mother was one of the first women to attend the newly established Burnley Horticultural College and Alice met acclaimed landscape gardener Edna Walling through that connection.

Many of Alice’s clients were women connected with Melbourne University and Melbourne’s Lyceum Club, of which, Alice, sister Frankie and their mother Ellen Mary were members.

The famous names didn’t end there – Robert and Patty Menzies and the Syme newspaper family were also Kew Garage clients.

Could your business be eligible for the Alice Anderson Sidecar fund?

Applications for the Alice Anderson Sidecar fund open on the 1 July 2021. To learn more about the fund and to apply visit the LaunchVic website.