It’s rare that Victoria’s four Commissioners to Asia get together to speak about their experiences.

But that’s what happened earlier this month. The Victorian Connection attended the event to record the key points from the panel discussion.

Hosted by Global Victoria and the Institute of Public Administration Australia (IPAA), the panel discussion was attended by about 200 Victorian public servants, federal representatives and trade partners.

It was a chance for Victoria’s four Asia-based Commissioners – part of our global network of 22 trade and investment offices – to shed light on the opportunities and challenges facing local businesses expanding into Asian markets.

Up for discussion was how engagement with Asia remains of key economic merit to Victoria, particularly in the light of rapid industrialisation and urbanisation, and the growth of an Asian middle class creating new patterns of global production, trade and investment. "Building closer engagement with Victorian business" has been a priority for Jakarta-based Brett Stevens, Victoria’s Commissioner to Southeast Asia since 2016. He and his team deliver Victoria’s Southeast Asia Trade and Investment Strategy which aims to grow bilateral ties, promote Victoria and identify opportunities in the region that align with our state’s capabilities.

Impressive gains have already been notched up: Victoria’s two-way trading relationship with South-East Asia was worth $15.3 billion in 2016-17 – a 30 per cent rise in the past decade.

While each market in Brett’s region is disparate – for example, Vietnam has 7.5% annual growth while Singapore has 1.3% annual growth – the food and beverages, education and professional services sectors are booming across the region. Michelle Wade, Victoria’s Commissioner to South Asia works in Bangalore and oversees the Mumbai office. With her team, she brings to life Victoria’s India Strategy: Our Shared Future, a decade-long blueprint looking at investment collaboration opportunities for not only international education, but also the likes of health, sport, tourism, creative industries and agriculture.

An expanding market for Victoria with India and Sri Lanka is international education. Victoria is home to the largest Indian population in Australia and that number looks set to climb further given the Global Innovation Index predicts India will be the world’s third-largest economy by 2030.

"We’re helping India and Sri Lanka build their future workforce through higher education as they become truly international," explained Michelle, who says that India has 400-million millennials. Of them, "50,000 Indian students come to Victoria every year to study, which is double the number of Indian students going to New South Wales. Also, 10,000 students come to Victoria from Sri Lanka each year. In education provision, Victoria has gone from zero to hero in 20 years."

As for doing business in India and Sr Lanka, Michelle advises: "Presence on the ground by Victorian companies is essential: you need to be there in person, no matter whether your focus is architecture or pollution management." 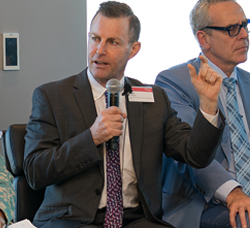 Similarly, Tokyo-based Adam Cunneen, Victoria’s Commissioner to Japan and Korea, is a supporter of Australians being physically present for meetings in his region to build lasting cultural ties. The trade rewards, after all, can be significant.

Adam manages Victoria’s interests in Japan and the Republic of Korea, respectively our third and ninth largest two-way trading partners. Japan is also one of our largest international investors, with 170 major companies currently operating in Victoria.

Victorian businesses examining trade opportunities in this region would do well to consider population; by 2060 Japan’s is expected to slump by one-third. Whereas in Korea low fertility rates and an ageing population are of great consequence. They have one of the world’s lowest fertility rates, and almost half the population will be over 65 years old by 2065. This means both countries will need to invest in international supply chains (such as those in Australia) to maintain economic growth, particularly in areas such as agribusiness, agtech, metal and advanced manufacturing.

Energy is also a prosperous area for the region. There’s a push for a substantial infrastructure spend to convert brown coal into new fuel such as hydrogen, with supply to Japan through the half a billion dollar Hydrogen Energy Supply Chain pilot project in the Latrobe Valley in progress. Tim Dillon, who took the reins as Commissioner for Victoria to Greater China in 2014, lives in Shanghai and oversees offices in Nanjing, Beijing, Chengdu and Hong Kong. Along with his team, they are responsible for delivering Victoria’s China Strategy: Partnerships for Prosperity, which has locked in four targets from 2016 to 2026 across trade, investment, visitors and students.

Tourism is also heating up: over the next 10 years, Chinese visitors to Australia are expected to grow by 11.9 per cent annually. Inbound Chinese tourism to Victoria is slated to be worth $7 billion in 2026-27 (+10.3% per annum) and contribute 39 per cent to total expenditure in Victoria, opening opportunities for Victorian business to provide payment systems, hospitality and communication services. The 'In-Conversation with Victoria’s Commissioners to Asia' is an annual event established as part of Global Victoria’s VPS Asia Capabilities and Scholarships Program. It was held on Tuesday 7 May at the Investment Centre Victoria and was moderated by Simon Phemister, Secretary, Department of Jobs, Precincts and Regions.

To register for other upcoming events, visit the Institute of Public Administration Australia.

Read our interviews from last year with each of Victoria’s Commissioners to Asia to find out more about them and their roles: