Moe GP Lindsay Wakefield has morphed into a market-leading manufacturer, selling custom lifts to the US, Japan, South East Asia and the Middle East.

Ever wondered what your life would be like if you made a dramatic career U-turn?

Lindsay Wakefield bit the bullet and did precisely that.

Switching from doctor to manufacturer almost four decades ago, Lindsay’s company’s lift products – some of which can shift 8000 kilogram loads between floors in 80 seconds – are now in demand worldwide, and domestic clients include the MCG, Melbourne’s Shrine of Remembrance, Canberra’s Parliament House and Sydney’s The Star casino.

But let’s wind back to where the idea for his business, Safetech, shall we say, lifted off.

From doctor to manufacturer

Graduating with a Monash University medical degree in 1981, 23-year-old Lindsay decided to make a career switch while working as a GP at a Noble Park occupational health clinic. “I regularly treated back injuries and saw that they were common amongst workers loading and unloading pallets of goods. So, I thought up the Palift, a spring-based mechanism to sit underneath pallets that raised or lowered automatically to waist height and helped prevent lifting injuries.”

It was an epiphany that proved life-changing, with Lindsay subsequently swapping medicine for precision engineering and manufacturing.

Although it took 18 months of hard yakka to get the idea to market, the Palift, designed with his brother David and engineer friend Bruce Cox, was finally born in 1984.

The market ate it up: the first Palift revolutionised the materials handling industry, becoming a flagship item.

“It was our first product, and it’s still selling around the world,” says Lindsay, now 63.

Some 300 Palifts still sell each year, down from 600 annually in its heyday. “Thousands sell overseas and we’ve been receiving royalties for 30 years,” notes Lindsay. “It’s now less than 1% of our sales, but it’s still very dear to our hearts.” 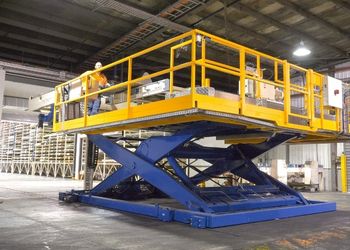 Such innovation hasn’t gone unnoticed by industry. In 2006, Safetech was named Australian Telstra Business of the Year, and in 2019 it won the Victorian Government Manufacturing Hall of Fame awards in the medium business category.

The rise of manufacturing in China hasn’t curbed Safetech’s continued success, explains Lindsay, because his business is all about customisation. “Most of our products (about 65%) are too complicated or bespoke to be imported. The rest we import and whilst the market is competitive, we offer our customers more than just the equipment – we bring experience, advice, national support and service, and customised solutions.”

For 2022, Lindsay’s plan is to expand market share, driving import replacement and adding to Safetech’s product offering with locally-made innovative designs. “In Australia, there’s a significant shift toward local manufacturing, and Safetech’s perfectly positioned to fill the demand from Australian customers for quality, locally engineered and built products that are nationally supported. We’ve grown rapidly over the past five years, adding nearly 100 staff, and have entered multiple new markets including residential vehicle lifts, mining elevated work platforms, loading docks, retail and self-storage. These new products are the result of a Safetech culture that encourages close collaboration between our engineers and our customer base.”

Especially when you factor in that design enables businesses to compete through differentiation and the form or function of their goods and services, not just the price – an important consideration in a high wage and high-cost country like Australia. Such investment is helping to make Victoria’s design industry a major contributor to our state’s economy. In 2019, Victorian design consultancies earned revenues of $6.3 billion, up 25% from 2015 ($5 billion), including over $400 million in exports.

As well, due in part to its history as the centre of the auto, manufacturing and telecommunications industries in Australia, Victoria’s a leader in industrial and engineering design, including medical technology  and scientific devices. Reflecting the meshing of physical products, digital technology, and services at the core of advanced manufacturing and the fourth industrial revolution (Industry 4.0), Victoria also has recognised strengths in service and experiential design, communication design, digital and human factor/user experience design.