Many think science is abstract, too complicated or irrelevant. Walter and Eliza Hall Institute of Medical Research animator Dr Drew Berry is on a quest to change (and blow) your mind.

“If there is a Steven Spielberg of molecular animation, it is probably Drew Berry,” stated The New York Times. High praise, to be sure, but that analogy seems pretty apt.

As well as being Walter and Eliza Hall Institute’s (WEHI) ‘digital artist in residence’ in Parkville’s biomedical precinct, creating kaleidoscopic 3-D landscapes of the institute’s disease breakthroughs since 1995, Drew has become an international success story in his own right.

That recognition stems from the 49-year-old’s uncanny ability to use surprisingly beautiful, mesmerising animation to show how cells work in the human body when fighting all sorts of things: think the common cold, HIV, malaria, diabetes and cancer. 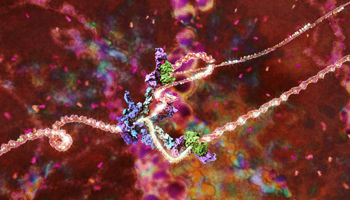 Name drop alert: he’s also rubbed shoulders with A-listers. In 2002, Drew spent six months directing a DNA themed video for Björk (his teenage crush) on the song Hollow for her 2011 album, Biophilisa, and he created DNA special effects for Keanu Reeves’ character in the 2008 science fiction movie, The Day the Earth Stood Still.

Since then, work highlights have headed Drew’s way thick and fast. In addition to exhibiting at New York’s Guggenheim and Museum of Modern Art, as well as at the Centre Pompidou in Paris, he won a BAFTA award (2004) and an Emmy (2005) for the television series, DNA, and in 2012, he was invited to present at TEDx in Sydney and California.

Drew has also tasted success at home in Melbourne. His self-declared pinnacle of his career was being invited to create a projection show for White Night Melbourne in 2014. He explored eight human viruses – including papilloma, polio and gastro – magnified one billion times and projected onto the inside of the 35-metre wide dome of the State Library of Victoria’s reading room. His installation was so popular that there was a 90-minute queue to enter the library, even at 6.30am the next day.

But here’s the kicker. What makes Drew’s thriving career all the more intriguing is that the industry that has made him famous – computer animation – did not even exist three decades back.

“I was the first generation to grow up with a personal computer, which had a black and white screen with just text,” reminisces Drew. “I moved on to the Apple II in my teenage years: I loved the graphics of computer games.”

Turns out, growing up “fluent in computer graphics” was the stepping stone the University of Melbourne cell biology graduate needed to become a world-class animator, telling time-lapse stories of cells far too small to be seen through a microscope.

“It’s very important for me to be reaching people who don’t normally encounter science because they think it’s not interesting or approachable,” Drew says. “I gather data meticulously, then build molecular landscapes. I care very much about how the audience views it: the pace, framing, the journey, colour choice. I’m trying to reveal science, not bury it in special effects.”

Gateway to the nucleus

DNA inside the nucleus

Human cell about to undergo mitosis

The public, in turn, have been lapping it up and Drew couldn’t be happier, especially as most of the research is taxpayer funded. “Medical research is a booming industry and there’s big pressure to explain it to the public,” he figures. “They’ve largely paid for a lot of this and it’s going to impact our society (and their loved ones) in treatment for diseases such as cancer that were untreatable before. It’s a transformative time driven by technology and innovation. And Melbourne is a huge hub for medical research; it’s on the world stage because of its concentration of truly great institutes and universities, many of which are focused on medical research.

“I’m trying to authentically reconstruct, with as much detail and accuracy, what’s being discovered in labs around the world, investigating about how our bodies work. There’s a ton of detail buried in scientific journals, but there isn’t much visual representation of what they’re saying. I gather up all these fragments of data and I’m able to reconstruct what’s happening on a very small scale about how our bodies work.” 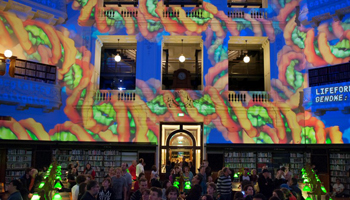 While medical research has been booming for decades in terms of how radical technologies are improving the rate of discovery, Drew believes the medical research sector’s popularity is about to explode. “Boundaries that were there before, for investigating how cancer or other diseases work is being transformed,” he says. “There’s a tsunami of data coming in and discoveries are happening at a fast pace.”

Which is a far cry from what things were like when Drew first became a part of the animation industry back in 1995. “The animation software I was using then – which is the same as I’m using now – cost $17,000 a year for the software licence. Nowadays, it’s free. So every kid with a laptop can access it. The barrier to trying out this technology has gone. Yet as the saying goes, ‘you can hand out watercolours to everyone but not everyone is going to be an artist’. People who persist and practice and really understand the tools will do well with it, as will people who have stories to tell. I think there’s plenty of stories to be told in biology.”

Especially in Victoria, a breeding ground for medical and scientific innovation. “Going back 50 years, there’s been huge investment in medical research in Victoria and Melbourne in particular and we’re seeing the dividends. We’ve been smartly investing for a long time, so there’s tremendous growth here that’s going to impact all of us who have loved ones with serious illnesses.”

As to the future, the next chapter will be about embracing virtual and artificial reality. “We’re definitely moving away from animation and more to creating landscapes in game engines that play endlessly: you won’t see a movie,” says Drew. “The game will have you sitting in a forest and looking up at butterflies, or being on top of Mount Everest. And I’m going to put you inside a cell in as accurate a representation as possible and it will blow your mind.”

To find out more about medial research in Melbourne, as well as explore some of Drew’s animations, visit the website of the Walter and Eliza Hall Institute.