The Geelong Convention and Exhibition Centre (GCEC) promises to be a game changer for tourism and the regional economy.

When it comes to identifying reasons to visit Geelong and the Bellarine, you would be hard-pressed to find a stronger advocate than Brett Ince, Executive Director of Tourism Greater Geelong and The Bellarine. 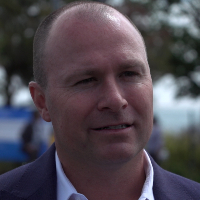 Having grown up in Geelong, Brett recalls working on plans for a local convention and exhibition centre when his career began 18 years ago.

It’s understandable then that Brett was thrilled when the Victorian Government recently announced the location for the future Geelong Convention and Exhibition Centre, along with extra funding for the project.

Brett explained, “the Centre will be an absolute game changer for the region. It will drive off peak, mid-week visitation to complement leisure visitation along our coastline.”

Considered one of the most important developments in regional Victoria, the Geelong Convention and Exhibition Centre will be fittingly located on city’s waterfront, with construction due to commence early in 2022.

The $294 million Centre is funded through the Geelong City Deal – a 10-year plan by the Victorian Government, Commonwealth Government and City of Greater Geelong to revitalise Geelong and unlock the potential of the Great Ocean Road visitor economy.

It will include a 1000-seat plenary venue along with 3,700 square metres of flexible multipurpose space to accommodate a range of events of all sizes.

For Tourism Greater Geelong and The Bellarine, attracting more visitors to the region for business events is key to ensuring the region recovers after a couple of “extremely challenging” years.

Already, a $400,000 grant from the Victorian Government’s Regional Recovery Fund for a Business Events Attraction Project has resulted in 30 business events being booked over the next 12-18 months, and they are looking forward to the Centre’s completion to increase what is on offer.

“If we didn’t have the business events or business travel sector, we’d be highly seasonal”, said Brett. Business visitors offer many benefits: “they’re staying for multi days, they’re mid-week, they’re off peak and, in general, they spend more in the region.”

Growing the region’s visitor economy is a key consideration behind the Victorian Government’s $261 million investment in the Geelong Convention and Exhibition, with the newly announced $120 million going towards the development of a 200-room luxury hotel and to revitalise the nearby waterfront.

Brett welcomes the extra funds: “Geelong has lacked a hotel of that calibre and scale, and the additional investment will also revitalise the western beach precinct, which was needed.”

With such a diverse range of experiences on offer – from nature, food and wine, the Geelong CBD and waterfront, to the coastal villages of the Bellarine – the new Centre will mean many more visitors will come to enjoy the region in the future.

“Long term investment is strong in the visitor economy and this additional $120 million from the State Government for the Geelong Convention and Exhibition Centre will drive absolute change in terms of private investment,” said Brett. “We know that it is a bright future for the region.”