The small southwest Victorian town of Garvoc doesn’t have a pub or even a local shop, but what it lacks in size it makes up for in heart. Never has this been more apparent than when the St Patrick’s Day bushfires tore through the region in 2018.

As fire engulfed many properties, former President of the Resident’s Association and CFA volunteer, Leo Campbell and his wife Diane jumped into action. The pair were at the forefront, offering respite to residents and turning the old Garvoc Community Hall into a refuge.

But the 160-year-old hall had seen better days.

“The day after the fires went through, we went down there to make sandwiches and we had to clean the mice poo off the benches before we could do anything,” Diane says.

The bushfires sparked the motivation for Leo and the Garvoc Resident’s Association to campaign for a new hall and community hub.

“We thought we would look into repairing it, but the old hall was too old. It was cheaper in the long run to build a new one,” Diane says.

Diane and Leo met 45 years ago and raised four children together in Garvoc. She says that nothing would stop Leo when it came to helping the Garvoc community.

“If he had an idea in his head, he just went for it. You couldn’t budge him, you couldn’t change his mind,”

The Garvoc Residents Association started fundraising and partnered with the Moyne Shire Council to make the hall a reality. With support from the Regional Infrastructure Fund, the association found a new location for the Garvoc Community Hub and construction began in 2020. After some delays and setbacks, the brand-new hub opened in April this year.

Sadly, Leo never got to see the Garvoc Community Hub complete. He passed away from cancer last year at the age of 68.

“He had a few health issues over the past six years, but he still put this new hub first and foremost - it gave him something to continue with,” Diane says.

“I was taking him through his cancer treatment and every time we went past the hall, he would be checking it out as he wanted to get in and see inside - but he never got there.” 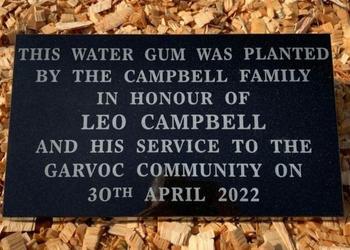 “We would drive past, and he would say; 'hurry up you buggers, I want to see the finished product', but he didn’t last that long.”

Now complete, the hub provides a meeting space for community events and groups, including the Garvoc CFA and the Garvoc Residents Group. The hub also includes a new kitchen, meeting rooms, change rooms, and an outdoor play space for the Family Day Care services managed by Moyne Shire Council.

Leo and Diane’s daughter, Samantha Welsford, said her dad was very passionate about ensuring the community could have a place to come together, and that she knew he would be proud of how it turned out.

“I think he would have enjoyed seeing it if he could. Especially the part where the community has already been using it with regular footy tipping and meeting nights,” Samantha says.

Last month marked the 12-month anniversary of Leo’s passing with his family and friends packing out the hall to celebrate his accomplishments with a few drinks in what Samantha describes as ‘typical Leo style'. The Campbell family and the community also planted a tree outside the hub in recognition of Leo’s role in bringing it to life. “The family appreciates the recognition that the committee and the community have given Leo for the hard work that he’s done,” Diane says.

“It brings the community together, and being a farming community, we won’t catch up very often.”

Samantha says this is what drove Leo, and whilst she’s happy to see him get the recognition, she knows he would be the first to point out that he didn’t do it alone.

“It made me proud as a daughter and as someone who grew up in the community,” Samantha says

“But I also think he wouldn’t like the fuss that was made, because it wasn’t just him, it was everyone in Garvoc.”

Read more below about how other community halls are helping local communities across regional Victoria.

View from high up, looking down over the Bundy Hall and land surrounding as the sun rises on the horizon
Interior photograph of band performing on stage under red lights with an audience sitting at dining tables watching
Artists, Matt Adnate, Levi Geebung, Tom Day and Campbell Roberts