Feed your mind and soul, and be inspired by all things arty at these regional exhibitions over the coming months. Troy Emery: After The Gold Rush
Until 9 February

Ballarat’s 1850s gold rush sets the scene for this show which uses the work of Melbourne’s Troy Emery juxtaposed with other works depicting the gold rush from the gallery’s collection.

In this installation, Troy addresses the goldfields, refers to the cultural value of an art gallery and explores the value and rarity of native wildlife. His sculptures, paintings, drawings and embroideries comment on animals and Australiana (as well as his obsession with childhood stuffed toys). Pompoms, tassels, tinsel and wool all feature as he intentionally confuses traditional sculpture with craft. 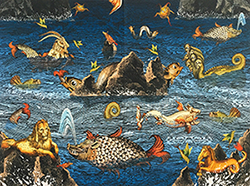 Animals in all their glory are examined in this show, which showcases prints, drawings, paintings and sculpture from the gallery’s extensive collection where they’re depicted as hunters’ prey, supernatural creatures, and symbols of danger, love, environmental threats and political caricatures. The exhibition includes work from artists including Eric Thake, William Strutt, Patricia Piccinini, Ginger Riley Munduwalawala and more.

Find out more about these exhibitions currently showing at the Art Gallery of Ballarat.

Josh Muir: What’s On Your Mind?
Until 12 April

Through this installation, Ballarat-based Gunditjmara/Yorta Yorta artist Josh Muir takes audiences on an audio, animation and graphic design journey into his mind, referencing Indigenous heritage, hip hop, pop culture and street art. Josh has an impressive CV: his work appears in collections by Koorie Heritage Trust, the National Gallery of Australia, and the Art Gallery of the Northern Territory. Also, in 2016, he was commissioned as a major project artist by White Night Melbourne, and projected his work, Still Here, on the façade of the National Gallery of Victoria. This show is part of the Go Solo exhibition series, which gives artists in regional Victoria the chance to produce a significant body of work for exhibition at Bendigo’s gallery. The Unquiet Landscape
Until May

Here’s a novel idea for an exhibition, pun intended. It’s a ‘conversation’ between DH Lawrence’s 1922 novel, Kangaroo and various artworks. The novel – based on a three-month visit to Australia by Lawrence and his wife Frieda, in 1922 – tells a loosely autobiographical account of an English writer and his German wife. Lawrence wrote the first draft in just 45 days while renting a house south of Sydney, at Thirroul. A comment on the Australian character, Kangaroo was deemed by some to be the first Australian modern novel. None of the art included in this exhibition was made with the text in mind, but by pairing each work with a quotation from the novel, unexpected correspondences between image and text are discovered. Paintings from the museum’s collection as well as works from living artists are thoughtfully brought together, including works by Arthur Streeton, Frederick McCubbin, Rupert Bunny, Phillips Fox, Clarice Beckett and Rick Amor.

From the Land
Until May This exhibition showcases the works by the Dja Dja Wurrung people of their homeland, which takes in the catchment area for the Loddon, Campaspe and Avoca Rivers in Victoria’s Riverina. Bendigo is the largest city in Dja Dja Wurrung country, with other cities and towns including Wedderburn, Castlemaine, St Arnaud, Maryborough, Boort, Heathcote and Maldon. Speaking in his native tongue, Uncle Rick Nelson, Dja Dja Wurrung Elder says of the exhibition: “Womindjika Woorineen willam bit Willam DJA DJA wurrung Balug Wokuk mung gole-bo-turoi talkoop mooroopook.” “Welcome to our homeland home of the Dja Dja Wurrung people, we offer you good spirit.” Melbourne-based Stephen Bram is regarded as one of the big hitters of Australian contemporary art and is best known for his large-scale wall drawings that toy with abstraction and illusion. In this Australian premiere, Stephen takes that illusion concept up a notch via dreamy black and white paintings that touch on landscape and architecture.

Visit the Geelong Gallery website for more on this exhibition. 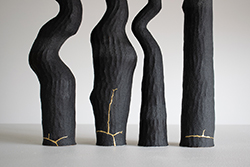 SAM has partnered with Craft Victoria to put on this show, which explores Adelaide ceramic artist Kerryn Levy’s vision to bring people together through a shared love of clay, landscape and beautiful objects. Kerryn is fascinated by human interaction with the Australian landscape and her sculptural vessels bring to mind human, animal and botanical bodies. This exhibition is the result of her recent trip to Central Australia where she studied plant regeneration after a controlled burn. Inspired by the contrasts in colour she found there, Kerryn uses new surface treatments and glazes to create colours and textures evocative of the Australian landscape. Emily Ferretti: On My Way. Drawing Wall #37
Until 25 March

Growing up in country Victoria, landscape artist Emily Ferretti loved the delicious freedom of attaining her driver’s licence, and On My Way describes the sensation of driving and looking out the window at blurring rural scenery. An artist for over 15 years, Emily has exhibited widely and undertaken studio residences at Gertrude Contemporary in Melbourne, Cite de Arts International in Paris, and Green Street in New York.

Find out more on the Shepparton Art Museum's website.

Gippsland Art Gallery is calling on artists to support the fire relief effort by submitting artworks for a fundraising auction. All artworks will be displayed at the gallery from 15 February, culminating in an auction on the final day, on Sunday 15 March 2020 at 4.00pm at The Wedge Performing Arts Centre, 100 Foster Street.

All money raised will be donated to the Gippsland Emergency Relief Fund to help support those who have lost their homes and property in the East Gippsland bushfires.

More details can be found on the Gippsland Art Gallery website.