Stuart is a Yorta Yorta man, father of four and while he’s just started on his art journey, his contribution to the story of Echuca’s past is big. With a firm tone that only an older sibling uses, Stuart Hearn’s brother Keith gave him the nudge he needed to make a special contribution to Echuca’s Discovery Centre.

After 10 years, the Discovery Centre’s representation of Echuca’s past is now complete with the inclusion of a significant Indigenous mural. The historical addition depicts the Creation story of the Murray River that runs through Victoria, New South Wales and South Australia. The mural forms part of the centre’s long-awaited refurbishment.

Stuart is a Yorta Yorta man, father of four and is early in his painting journey. While painting something of this size is a first for Stuart, the Creation story he illustrated has been with him since he was a child.

“When we were kids, Uncle Wes would show us certain skills and tell us stories which are still cemented in my memory,” Stuart said.

“This particular story was told almost word for word by Aunty Greta Morgan and Uncle Des Morgan, while standing in front of a mural located at the Darnya centre in Barmah.

“Hearing this story again decades after Uncle Wes told it, I knew this was the one I had to paint at the Discovery Centre.”

The Discovery Centre at the Port of Echuca is the starting point for visitors wanting to learn about the area’s history. Audio visuals show the history of Echuca’s well-known paddle steamers transporting cargo such as wool and timber to Victoria in the 1860s to early 1900s. The addition of the Indigenous mural shows an even longer history and completes the story of Echuca’s past.

Craig Rowden, Project Manager for the Discovery Centre has driven change and inclusion since coming into the role two years ago.

“The Indigenous communities around this area did trades with the paddle steamers and were significant in contributing to the economic prosperity of the land,” Craig said.

“For us, the Indigenous acknowledgement and Creation story of the Murray was important to include at the centre.” 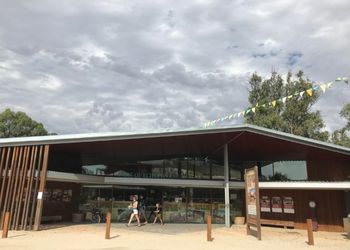 The new mural has been warmly welcomed by local Indigenous communities following little change to the displays since the centre opened 10 years ago.

As Elders traditionally are only able to verbally share Creation stories, there will be a recording of a Yorta Yorta Elder telling the Murray River story which will activate as visitors walk past. At the end of the mural is an image of a young local Yorta Yorta girl – Marinda. To the delight of visiting families, she is recognised by the community and plays a significant role in the mural.

“You’ll have to come visit to see it, as the creation of the river is caused by something Marinda is shown to be doing,” Craig said.

Stuart is about to complete a Certificate 3 in Cultural Arts, giving him an understanding on a deeper level of how to paint Indigenous stories.

“I’m so happy with how the mural turned out as I had no idea how to paint something of this size,” Stuart said.

“I really threw myself in the deep end and it was worth it to be part of this special project.”

Stuart realised working with a wall canvas on a larger scale didn’t necessarily mean everything would need to be painted larger. His use of dots needed to stay small to avoid paint running down the wall.

“I tried different ideas and they worked out, thankfully,” he said.

“The Discovery Centre has been really supportive and I’m just so appreciative I could play a part in telling the important story of this region.”

Since completion of the mural, Stuart has been busy setting up a joint exhibition of his paintings and clay sculptures with another local Indigenous artist, Phillip Bell. These artworks were shown at the Bendigo TAFE, Echuca campus, at a two-week exhibition in early March.

The Victorian Government has provided $600,000 to fund the Port of Echuca Discovery Centre Refurbishment as part of the Regional Tourism Investment Fund – Stimulus Round. The Fund aims to support jobs and local community recovery from the impacts of COVID-19 and the 2019-20 bushfires.

You can find more information at Regional Tourism Investment Fund.