Mining has traditionally been a male-dominated sector, but here’s one woman who’s levelling the playing field.

Jane Burton – Acting Executive Director of the Victorian Government’s Earth Resources Policy and Programs division – has been a major player in the resources sector for well on three decades. She has recently received this year’s annual Victorian Exceptional Woman in Resources Award. The award denotes a commitment to increase gender diversity in mining operations, in corporate offices, and across the broader mining equipment, technology and services sector.

"It’s super important to have these awards to promote gender diversity," Jane says. She has observed "a slight increase in women involvement in the mining sector, but nothing like the numbers I’d like to see."

"These awards recognise women for contributions – but there are a bunch of women out there doing amazing work who aren’t recognised. It takes someone to be nominated to help raise the profile and so more effort needs to go into encouraging people to nominate."

She recommends female newcomers to the resources industry will find opportunities in Victoria. "We’re blessed in Victoria with great earth resources – including brown coal, which is significant on a world scale. Being able to use this resource to meet community and environmental expectations while delivering economic development for the state is a constant challenge that’s both rewarding and exciting."

Away from her recent recognition as an ‘Exceptional Woman in Victorian Resources’ what does Jane’s typical work life look like?

"Wow, where do I start?" she laughs. "I spend around three days a week in Melbourne, the other two in Traralgon and I make an effort to visit other parts of the state to further develop relationships with the mining and extractives sector as there’s no better way to understand issues and challenges than to meet with people at their sites."

Being partly based in the heart of Gippsland is a bonus for Jane. Her weekend passion is running a small horse and cattle farm in Drouin West and she recommends the region highly. "I love working in Gippsland, the people are great. It has amazing beaches, mountains, lakes, towns, farming areas… Gippsland has it all!"

Growing up in Boolarra in the Latrobe Valley and wanting to remain close to her roots, Jane has always embraced regional opportunities. However, a career in science was always in her sights.

"My love and curiosity of science stemmed from my dad, an engineer. He encouraged me to pursue the sciences and supported me — including helping me with physics — to study science," she explains.

Post-graduation, she worked in Morwell, where a Japanese consortium of five leading companies delivered a pilot project to make liquid fuel from brown coal. "I started as the junior chemist and was chief chemist by the end of the project in my late twenties," she says.

"From there, I worked for an energy education consultancy delivering training packages to the Chinese market, for regional economic development, for local government (town centre redevelopment, planning, urban design) and for WorkSafe (leading its agricultural program for Victoria)." 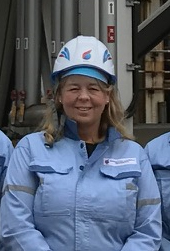 "The pilot is exciting not just for Victoria, but for all watching this new clean hydrogen sector emerge," says Jane. "Construction for the pilot – set for this year and for operations in 2020 – will see brown coal gasified in the Latrobe Valley and the hydrogen separated, compressed and transported to Hastings, where it’ll be liquefied and shipped to Japan’s maritime port of Kobe in the greater Osaka area. Work to date by CSIRO and others show that this pathway is the most economic for hydrogen production at this time."

Added to which, lessons from this pilot will also apply to hydrogen produced via other pathways including renewables. "Victoria’s well positioned to be a key player in an emerging clean hydrogen industry," observes Jane.

"We have a world-class brown coal resource and a world-class storage site where carbon dioxide can be safely stored off shore in the Gippsland basin."

To find out more about Jane’s field of work, visit the Earth Resources website.