What started as a small hall in the middle of a cow paddock is now turning Victoria’s country live music scene on its head. The Bundalaguah-Myrtlebank Hall is rocking regional Victoria almost 10 years after it was set to be demolished.

Over the last decade, community halls across Victoria are livening themselves up to make sure they continue to serve local communities for years to come.

The Gippsland region is no exception – with the Bundalaguah-Myrtlebank Hall (colloquially known as ‘The Bundy Hall’) – pioneering the wave of renovations and upgrades of halls across regional Victoria.

Opened in 1954, the hall brings together locals between Sale and Maffra, helping them connect and share each other’s company through community events and get-togethers.

The hall was closed in August 2012 due to the need for repair works and was set for demolition.

But thanks to the combined effort of the Bundy Hall Committee and funding from the Victorian Government, the historic building was saved and has become bigger and better, attracting visitors from Melbourne.

When it’s not offering live performances, the hall serves as a meeting place for the Country Women’s Association each Wednesday and offers other activities such as weekly yoga classes.

The turning point for the hall’s restoration was thanks to a reformed committee including local farmer Paul Versteden and teacher Brett Glover. Live at the Bundy was created – a not-for-profit series of live music shows at the hall that continue to sell out each month.

“After a few years it was pretty obvious to us that for our live music dream of great bands and great sound to be realised, we had to get out of the commercial realm and into a dedicated venue,” Paul says. Originally members of music club ‘The First Tuesday Blues Club’ in Sale, the pair set out to create a unique live music offering in Gippsland before stumbling across the opportunity that the Bundy Hall presented after it was closed in 2012.

After Paul and Brett joined the Bundy Hall Committee, a new business plan was developed to save the building, converting it into a live music and arts venue featuring a state-of-the-art sound system and acoustic treatment for up to 200 people.

Since its first sell-out show in 2013 featuring blues guitarist Fiona Boyes, Live at the Bundy has become a staple in Gippsland.

Aussie acts like Thirsty Merc, Mick Thomas, Jon Stevens and Vanessa Amorosi have had sell-out crowds, many making the journey from Melbourne.

“We set out to drastically improve on what was currently available in most music venues, and that starts with the clarity of the sound,” Brett says.

“It’s as far away from a commercial venue as you can get and provides a nod to yesterday – a lot of people love the nostalgia.”

An investment helped make the building safe for use again while additional upgrades to the building’s soundstage were delivered thanks to funding from the Latrobe Valley Authority’s Community and Facility Fund in 2020.

The works further improved the sound and acoustics of the venue and according to Paul, this was created with the intention of giving people music, vocal performance and conversation that is absolutely clear. 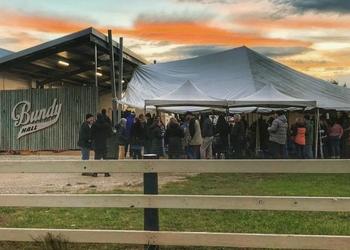 The listening experience is enriched by the possibility of nuance and connection, thus adding to the Hall’s community and acoustic focus.

“The first thing bands notice is the acoustic treatment of the ceiling and walls as well as the studio sound that you often don’t get in a community hall,” Paul says. “We get a lot of compliments about the place, especially from people who come for the first time.”

“Music brings people together and is a release from all the troubles of life. Many friendships have been forged at The Bundy and we continue to move forward as a community powered venue.”

Paul and Brett have set out to help other community halls across Gippsland and beyond, helping organise upgrades to improve their sound and live music potential, in places like Sale, Glengarry, Yinnar, Birregurra & Tallarook, just to name a few.

“We hope our legacy is inspiring other halls – it all starts with people,” Paul says.

“We never dreamed we would get this far, but we have – that is the power of community.”

This is one of many examples of how communities in regional Victoria are transforming and revitalising town halls as key venues and hubs for locals and visitors alike.

Read more below about how other community halls are helping local communities across regional Victoria.