In the next decade, the number of Chinese tourists holidaying in Victoria is set to surge, bringing financial windfall with it. By 2027, it’s expected that Chinese tourism will funnel $7 billion into our state. Provided relevant digital marketing is put in place, that is.

To win over Chinese tourists, Victorian retail, hospitality, accommodation, food, services and tourism need to have communication in place to which Chinese tourists can relate, such as QR code technology. Abbreviated from ‘Quick Response’ code, users scan a readable label, or code, on their mobile device to download information about a business in their language of choice.

While not in widespread use in Australia, QR codes are commonplace and instantly-recognisable via WeChat and other social media sites in China, home to 1.4 billion people.

Colac – with a population of 12,000 people about 150 kilometres from Melbourne – fully understands that tech trend. Getting on the QR code bandwagon to woo Chinese tourists is proving a business win for the town, which greets 2000 Chinese tourists heading to and from our world-famous Great Ocean Road each week.

In February, just before the Chinese New Year, Colac introduced regional Victoria’s first-ever QR code technology at 22 of its tourism businesses, with QR stickers advertising goods and services in Mandarin Chinese on their storefronts. Those participating have reported up to a 15 per cent increase in the number of Chinese customers visiting their businesses since February. 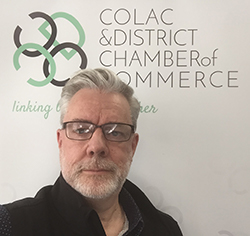 "With the QR code, you’re demonstrating to Chinese customers that you welcome them into your store with open arms," says Colac Chamber of Commerce CEO, Mark Sherry. "They can scan your unique QR code that directs them to your online business profile in both Mandarin and English. Alternatively, international tourists can access without the need to scan by visiting www.gdayfriends.com – they’ll find a map of where they’re visiting and can zoom in to find Chinese-friendly businesses that have done Chinese customer success training (for example, a counter card of Chinese phrases for staff) and who welcome their custom. This map is accessible in China before people visit Australia."

Branded as G’Day Friends, the rollout comes after the Colac Chamber of Commerce held a session for Colac and surrounding regions at the state-wide 2018 Digital Innovation Festival (DIF), to show how local tourism companies could benefit from mobile technologies to enhance the Chinese visitor experience.

"We recognised the potential, and that’s why we hosted the DIF workshop," says Mark. "The QR code is an accessible, easy-to-use, modern approach via a digital medium to engage a growing demographic: the Chinese tourist influx. The new Chinese tourist wave is one of the fastest-growing business opportunities Australia has seen, presenting huge opportunities to engage. G’Day Friends is accessible to all businesses who want to capitalise on the steady stream of Chinese tourists travelling through, or staying in, their community."

Even so, there’s still a fair way to go to get the message out. "There’s currently less than a handful of regional places who have adopted the QR code promotion: it’s in its infancy," says Mark. "Colac Chamber, however, recognises the potential for the future and we were determined to get on board at ground level. Being a forerunner, it does take time before such innovation catches on, however we continue to slowly build it towards something significant into the future."

While feedback from Chinese tourists is minimal due to the language barrier, Mark says tutorial videos provided to retailers by G’Day Friends – focusing on basic Chinese language to engage customers – are slowly helping to change that. “This has been most informative but mispronunciations or accents can lead to humorous interactions helping to break the ice between cultures, which is important and very much part of the aim of productive interactions.”

Evidence of that potency is seen in the fact that G’day Friends has been implemented in hospitality and retail businesses in the Southbank precinct and at Melbourne Airport. It has also been working with Life Saving Victoria, as well as local governments in Geelong, the Surf Coast Shire, Colac and the Otway Shire to promote water safety though the technology.

Such a strong preliminary track record paves the way for even bigger QR code collaborations down the line.

This year’s Digital Innovation Festival finished on 6 September. Watch our video from one of the events.