Among the tight-knit community of West Footscray, Chuping Yu is well known.

Since arriving in Footscray over 10 years ago, she’s been involved in West Footscray Neighbourhood House - first as a member and now as one of their most valued volunteers.

The Neighbourhood House is a volunteer-run organisation delivering programs to tackle social isolation and language barriers and offer support to single mothers and parents. When she first moved to the area, Ms Yu saw it as an ideal place to meet others in the community.

“Initially it was a handy place to stop. But then I got talking to the coordinator,” she said.

As they talked, Ms Yu mentioned her background in working with children and education, and the fact she had taught cooking for 35 years.

“I ended up getting involved and volunteering for some festivals, helping run child-based programs with jumping castles, face paint - things like that,” Ms Yu said.

“Originally, that program started for single people living in the public housing and many people don't know how to cope. I’d get all sorts of scraps and make giant pots of soup.”

Over the years, West Footscray Neighbourhood House has evolved to meet the community’s changing needs. But, when the pandemic hit, it was faced with a whole new set of challenges.

The opening of the Clarke Street Pop-Up Park in April 2021 provided a welcome solution. Located just down the road in the heart of Barkly Village, it offered a safe and inviting outdoor space to stay connected to the many members of the community who rely on its existence. 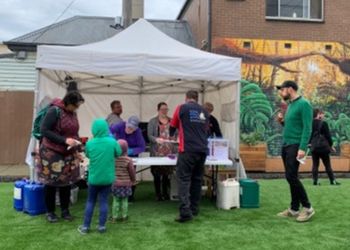 Rebecca Gelsi, who also works at West Footscray Neighbourhood House and is the Communications and Promotion Manager, says the pop-up park has been crucial to their organisation.

“It's given people opportunities to come together and have a chat in a pretty COVIDSafe environment,” Ms Gelsi said.

The park was supported by the Victorian Government in partnership with Maribyrnong Council and was backed by $94,000 in funding through the Neighbourhood Activity Centre Renewal Fund.

As well as the key role it plays for West Footscray Neighbourhood House, it’s attracting the wider community back into the area and supporting local business with an ideal spot to enjoy takeaway food and coffee.

“It's definitely become a great informal place for people to just meet up and have somewhere to sit, because there's actually nothing else like that along Barkly Street. There's often people just sitting on the park bench, or the informal seating and just having a chat which is really lovely to see.” Ms Gelsi notes.