Dr Alan Finkel, Australia’s Chief Scientist, is leading the development of a National Hydrogen Strategy to ensure our industries are front and centre as the global race to develop zero-emission fuels heats up.

This work has made Dr Finkel a frequent visitor to Victoria where a project to convert coal to hydrogen is attracting international attention.

It's in the Latrobe Valley, about 130 kilometres east of Melbourne, where the world’s first hydrogen supply chain will begin production of hydrogen mid-2020 with the goal of delivering shipped liquefied hydrogen to Japan on a purpose-built liquid hydrogen carrier ship.

The pilot is funded by a Japanese industry consortium, led by Kawasaki Heavy Industries, the Japanese Government and $50 million each from the Victorian and federal governments.

The Hydrogen Energy Supply Chain (HESC) trial will gasify brown coal from partner AGL’s Loy Yang mine to create hydrogen that will be liquefied at minus 253 degrees Celsius and loaded onto the specially designed liquid hydrogen carrier at the Port of Hastings.

This pilot ties in well with Japan’s push to embrace hydrogen to diversify its energy mix and meet its Paris Agreement climate commitments, and to move away from nuclear energy following the 2011 Fukushima nuclear accident. Also, Japan’s small land mass and large population means it currently imports 90 per cent of its energy, promising a large-scale, job-creating, ongoing opportunity for the Latrobe Valley given our abundant convertible coal reserves.

"The Latrobe Valley has a long history of government, industry and communities working together," says Dr Finkel. "There’s an existing, highly-capable workforce in the Gippsland area, and it’s a modest step to adapt to modern gasification processes to produce hydrogen – a colourless, odourless, non-toxic, non-metallic, combustible gas."

Dr Finkel – a supporter of a whole-of-economy emissions reduction approach where fossil fuels and renewables co-exist as we move towards a zero-emissions energy target over the next few decades – sees Victoria as a potentially major supplier of hydrogen, particularly to nearby Japan, South Korea and Taiwan with which we have existing trade links. By 2030, as hydrogen technology and infrastructure are refined and the subsequent production price drops, he estimates Australia’s hydrogen exports could be worth $1.7 billion, creating 2800 jobs. That’s provided hydrogen supply chains and technology currently being developed in Norway, Qatar and Saudi Arabia don’t steal market share. In the meantime, the HESC pilot, alongside the CarbonNet Project, has the potential to assist in Victoria’s energy transition and the decarbonisation of the state’s industry and manufacturing base, and mark the beginning of the emergence of the hydrogen economy in Victoria.

While the pilot project has an export focus, the development also presents exciting potential for Australia to develop its own domestic hydrogen energy supply. Work to expand hydrogen use domestically is underway to capitalise on this rapidly growing industry. Australia’s research sector also stands to benefit significantly from the pilot project through collaboration with the HESC project partners during the life of the project.

Environmental management will be paramount, maintains Dr Finkel. "For more than ten years the Victorian and Australian governments have been investing in the development of sequestration technology [carbon capture and storage] through the CarbonNet project. That’s critical, as having capacity to capture and store the carbon dioxide produced during the coal gasification process will mean hydrogen produced in the Latrobe Valley will be attractive to importing countries determined to decarbonise their economies."

As to why brown coal hydrogen is a cost-effective solution as Australia fine-tunes infrastructure and technology to fully embrace zero net emissions further down the track, Dr Finkel points to economies of scale. 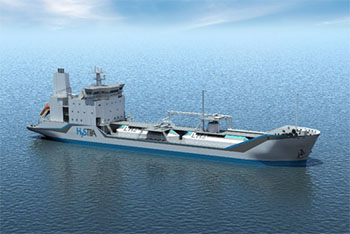 "The Japanese market has indicated it would be interested in buying hydrogen from Australia but in the long term, they want to purchase it at the same landed price as Liquefied Natural Gas (LNG)," he says. "A decision on the future of the project after the trial is likely around the mid-2020s, and it won’t proceed if it’s not cost-effective. But I’m optimistic production of hydrogen can be done competitively – we’ve seen volume-driven cost optimisation in other industries. Brown coal is attractive as the input to the process because it’s easy to access and available in very large volumes that would last hundreds of years. Also, having CarbonNet on the doorstep of the Latrobe Valley coal resource is an enabler in a decarbonised environment."

The Latrobe Valley and Japan connection could signal the first of many collaborations as countries all over the world face real challenges to address energy security while also reducing their emissions in a global push to tackle climate change. As a result, global demand for hydrogen will grow exponentially, with the hydrogen market tipped to be worth US$2.5 trillion by 2050.

If successful, the Latrobe Valley trial will potentially be expanded, which is in keeping with our state’s energy goals. The Victorian Government has legislated that 25 per cent of its electricity generation will come from renewable sources by 2020, 40 per cent by 2025 and 50 per cent by 2030. Along the way, that’ll create thousands of jobs, sink more energy into the grid and help drive down energy prices.

Find out more about the Hydrogen Energy Supply Chain project on the Invest Victoria website.