An Australian animal health initiative being undertaken on Timorese shores has already been so successful, it’s been estimated at saving upwards of $90 million in potential animal losses.

But first, let’s go back to 2019, when an African Swine Fever (ASF) outbreak claimed the lives of 150,000 Timorese pigs – approximately one-quarter of the nation’s pig herd.

Referred to as ‘pig ebola’, there is no known cure for the highly contagious virus, despite ongoing efforts to develop an effective vaccine.

On the ground was Agriculture Victoria researcher Grant Rawlin, who drew on the skills and experience from a nearly 40-year veterinary science career to aid with the response effort. 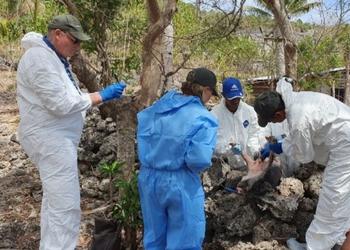 "The 2019 outbreak had knock-on effects that we can’t imagine in Australia, with devastating social, economic and cultural impacts," Grant says.

In their largely cashless society, the majority of Timorese people trade the few pigs they own for essential goods and services or gifts for celebrations – a literal piggy bank, if you will.

Valued at approximately $600 each, this alternative currency pays for secondary schooling, medical expenses and food –  and without it, the community suffers, with the livelihoods of up to 50,000 Timorese families estimated to have been affected.

So it’s not surprising the arrival this June of a portable animal health laboratory from Australia received a hero’s welcome.

Constructed as part of a seven-year project that Agriculture Victoria is delivering in partnership with the Timorese Government, it strengthens field and laboratory services and provides an early warning system for major biosecurity threats to Victorian agriculture.

Until now, because of the basic nature of Timor’s lab, all testing against ASF was with what is to us in Australia, a field test. This is a molecular diagnostic test known as loop-mediated isothermal amplification (LAMP).

While these LAMP tests are quick they don’t provide the gold standard of a lab-based qPCR test — which is where the container comes in.

Based on-site at a larger animal health complex in Dili, the lab is now home base for all Timorese testing efforts and enables higher quality testing to be undertaken.

It’s staffed by a team trained by an Australian taskforce, of which Grant and fellow Agriculture Victoria research scientist Peter Mee played a key part. Grant says the seeds of the lab project were sown during the 2019 outbreak, with more work on-the-ground delayed by the pandemic.

But with the relationships forged in 2019, the Australian and Timorese teams have successfully collaborated remotely.

This has enabled them to finetune the testing program credited with nipping another devasting outbreak in the bud when ASF was detected in late 2021.

With just a 48-hour turnaround diagnosing the first case, the response team swiftly implemented quarantine measures including ceased movement of pigs throughout Timor.

Instead of the devastation of the previous outbreak, losses were kept to a mere 100 pigs.

Grant says now more than ever, the program is an essential form of forward defence for Australia.

"This is about early warning to ramp up a response or forward diagnostics in an outbreak," he says.

"Rapid diagnosis, tracing and implementation of quarantine movement boundaries are key to limiting the spread of this virus."

The project has been a career highlight for Grant and a chance to use the varied experience and skills he’s built during that time.

With much of the initial work conducted in the field, his team worked in mountainous, jungle-like terrain – at times challenging but filled with opportunity.

"By working with these viruses overseas, we get to understand them," he says. "They’re not just a line in a textbook. To us operational guys, that’s gold."

And in promising news for the people of Timor-Leste, the project has also uncovered a major key to preventing future ASF incursions.

In small villages during the 2019 outbreak there were some standout discoveries – individual pig herds that survived the devastation.

The answer came down to basic animal husbandry.

Instead of running wild throughout the village, the pigs that survived were double fenced – that is, kept within their own separate enclosures inside a larger fence.

It’s this simple technique that kept them from the snout-to-snout contact that spreads ASF.

The Australian / Timorese program has now moved to a re-stocking phase – of which the testing remains a critical part.