In a talent win, the UK’s former Deputy Chief Vet is now our Chief Vet, helping to keep Victoria safe on the animal health and biosecurity frontline.

On a Zoom call from his home office – with his pet British Labrador occasionally appearing on camera and jumping onto his lap – Graeme Cooke is recounting how his love of animals was planted from a young age.

“I was brought up on an isolated dairy farm in the town of Enniskillen in Northern Ireland,” he says with a lilting Irish accent.

While it was an era of much political unrest, four-legged creatures proved a constant draw. 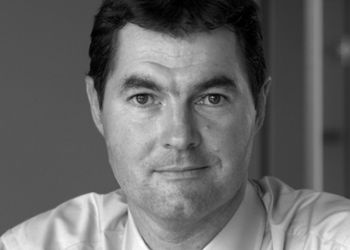 One particular childhood moment involving an animal – when the town’s vet was urgently summoned to the farm to treat an ailing cow – proved prescient. It had a lingering effect on twelve-year-old Graeme.

“The cow was incredibly sick but two days later it was back to normal and I thought, ‘What a great thing, to be a vet and fix things’. Particularly when those animals are helpless and reliant upon you. That’s what fired me up to really apply myself at school.”

He took that fired-up passion and, armed with veterinary qualifications from Cambridge and an MBA from the University of London, embarked on a distinguished vet career with global impact.

After being deployed to Afghanistan for a vet infrastructure project in 2009 and then a few years spent overseeing equestrian preparations for the London 2012 Olympics as Veterinary Director for the World Governing Body of Equestrian Sport (FEI), Graeme landed a plum role as the UK’s Deputy Chief Vet from 2016 to 2020.

In that position, he represented the UK in European Union trade negotiations and led response plans for a variety of disease outbreaks, including Foot and Mouth in both 2001 and 2007.

Then in December 2019, with his wife, beloved dog and his wife’s 12-year-old “eventing horse”, Graeme flew out here to take on the role of Chief Vet of Victoria, working with our farmers and food industry to control exotic animal disease outbreaks and to help protect Victoria’s $16 billion agriculture exports and $14 billion food and fibre exports.

“I could see Victoria was progressive in how government works with industry. Victoria’s been the only state in Australia to mandate electronic ID in both sheep and cattle: many countries are striving to replicate that,” says Graeme. Such traceability, he notes, gives us a worldwide reputation for selling safe meat and livestock that are easier to protect from biosecurity threats such as foot and mouth disease if it enters Australia.

“Victoria also has an active program to innovate, grow, protect, promote and modernise agriculture. So seeing those things convinced me Victoria was aligned with my desire to improve things, and to enable changes for the benefit of agriculture.

“Ultimately, our mission’s to ensure the animals of Victoria are healthy and related industries are prosperous. But the threat of disease is ever constant: we’re dealing with nature and nature keeps putting up challenges.”

And there’s the thorn.

Growing international trade, changing socio-political factors and human travel – which all introduce the risk of plant and animal exotic pests and diseases entering our borders – plus the expected effects of climate change, are making Australia increasingly vulnerable to outbreaks.

But Victoria’s doing its part, teaming up with other states to improve their biosecurity standards, says Graeme. “As an example, Victoria produces over 20% of Australia’s lamb but exports over 50% because our state has the processing facilities and ports. If other states have lower standards than us, they present a biosecurity risk to us. So it’s to our advantage – and to all of Australia’s advantage – to work with these states to deliver systems that work.”

Such collaboration is key: biosecurity, after all, is a shared responsibility and everyone – farmers, industry, the general public – has a role to play in the health of our state’s biosecurity, both now and into the future.

Australia’s largest ever outbreak of bird flu (avian influenza) was discovered in birds and eggs at a free-range chicken farm near Lethbridge between Geelong and Ballarat. The farm was quarantined with a five-kilometre radius protection zone. Over 400,000 chickens had to be destroyed.

Abalone Viral Ganglioneuritis (AVG), initially detected in Victoria back in 2005, was found again off the coast in the Cape Nelson area near Portland. A controlled area was declared from the coast to between two and 10 kilometres offshore, with restrictions on human activity put in place.

There are no known risks to human health and abalone remain safe to eat.

This outbreak was a reminder to always wash down boats, wetsuits and equipment to prevent disease transmission. Victoria is now working with the Victoria Fishing Authority and industry to find ways to live with the disease presence as it’s now an endemic disease in our state.

Liver disease was detected in a cluster of dogs in East Gippsland and the Latrobe Valley, allegedly due to consumption of toxic pet food. Agriculture Victoria reported 45 cases of dogs, of which 10 died, suffering from severe liver disease in the Bairnsdale, Traralgon and Frankston areas.

While Agriculture Victoria was initially contacted as the cause could’ve been an infectious agent, that theory was quickly discounted and testing of suspected pet food was undertaken at AgriBio and other laboratories, while PrimeSafe investigated compliance with the Meat Industry Act and the Australian Standard for the Hygienic Production of Pet Meat at licenced facilities.

The cause was eventually found to have been a plant toxin to which dogs are exceptionally sensitive. It was introduced to the Victoria pet food system through horses from the Northern Territory, where the horses had grazed on the plants that produce the toxin.

Peter smiling at camera with a cow in the background
Image of Jennie Pryce in a hallway, smiling and wearing a blue jacket
Aerial view of the Metung hot springs