A cinema in the rural town of Euroa in the state’s north-east is a beloved venue that unites the community and brings people together.

Brendan Paterson knows just how much Euroa’s cinema means to the community. He’s witnessed mums in tears being able, for the first time, to take their kids with autism to the movies, thanks to the cinema’s sensory-friendly screenings.

“Today we had about 60 people for the sensory-friendly screening, which means that we keep the lights on low and the sound down a little bit,” Brendan says.

“It’s good for kids with autism or kids with anxiety or even just little kids because it’s not dark and scary.”

Brendan has volunteered at Euroa’s Community Cinema for 19 years. He was there on opening night in 2003 and has seen the cinema go through a few changes. There are several factors, Brendan says, that make the cinema accessible to everyone in Euroa. “We have parking right out the front, a flat foyer that leads right into the cinema, disabled toilets, and dedicated spaces in the cinema for people with wheelchairs and prams.”

“The tickets are cheap and that’s important – because money is pretty tight up this way and we want as many people as possible to be able to come here and enjoy themselves.”

Brendan’s experience working at an independent school in regional Victoria for kids with autism made him even more attuned to the value of an inclusive cinema experience.

“Along with autism, these kids had other challenges, including medical,emotional, and psychological challenges, and it stopped them from not only going to mainstream schools but doing a lot of mainstream stuff,” he says.

“The one thing that has been really nice up here is seeing first-hand how popular our sensory-friendly screenings are. Seeing parents being able to bring their kids to the movies for the first time and witnessing the impact of that has been awesome.”

The cinema closed last year for several months due to COVID-19 restrictions, and it proved the perfect chance to give the historical building a makeover. Funded through a grant from the Victorian Government, the refurbishments included sanding and polishing the timber flooring and upgrading the seating within a new accessible and inclusive floorplan for 260 movie-goers.

The cinema’s historic balcony chairs have stayed in the front rows and the subsequent rows of cloth chairs have been upgraded to modern theatre seating. The new floorplan also includes five dedicated wheelchair spaces within the rows of seating and two rows of chairs with lift-up armrests for people who need more room.

Smaller community theatres are also benefiting from the makeover, with the old seating being repurposed by Violet Town and Albury Wodonga film and theatre groups.

Brendan says the new inclusive floorplan has been embraced by the community.

“Last weekend, I was upstairs waiting for the projector to cool down after a screening, and I overheard a little girl who was eight or nine years old talking to her mum. She walked over to where one of the spaces was for wheelchairs - she stood on it and said to her mum ‘hey this is a friendly cinema - they’ve even put aside spaces for people in their wheelchairs to come and sit with their friends’,” Brendan says.

“I thought that was pretty special that an eight or nine-year-old picked that up.” 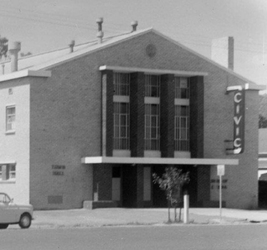 Volunteering at the front-of-house ticket office and kiosk until about 2012, Brendan received in-house training to become a projectionist – first, on the old 35mm film projector before the cinema embraced digital screenings in 2014.

“With the old film projector, we’d have up to 10 rolls of film that we’d have to unreel and splice together. It was quite an involved process where lots of things could go wrong,” Brendan says.

“I mucked up occasionally.”

“In my second ever screening for the film Australia, I put the sixth reel on upside down and back to front. It just so happened to be our biggest audience ever and they had to sit through 15 minutes of the film upside down. I learned not to make that mistake again.”

The digital screenings have meant that the cinema can get films sooner after their release, instead of having to wait for up to three months.

“The sound and picture quality are through the roof,” Brendan says.

The cinema hosts youth nights during the school holidays where ticket prices are $5 or free, often with free pizza thrown in as well.

But Euroa’s Community Cinema is more than just a cinema.

The building which houses the cinema was opened in 1938 as the Euroa Town Hall. Since then, it’s created memories for many locals and stood the test of time as a cherished cultural asset to the community.

It’s even been used to support the community through a heatwave – with the Shire opening the cinema with air conditioning for people to come in and cool off. It’s used for fundraising events and can also be hired out for private functions.

Strathbogie Shire Council Mayor Laura Binks remembers her brother and friends who had their high school debutantes at the Town Hall before it became a cinema.

“There’s a lot of community pride in the cinema,” Cr Binks says.

“We have some really passionate council staff who have been involved in the cinema for some time now and support the volunteers who do an incredible job to keep it running.”

“The recent refurbishments have allowed us to create an inclusive and accessible space that everyone can use and enjoy, and that’s really important for a small country town.”

A community choice voting platform on the Council’s online engagement site Share Strathbogie allows people to vote for a monthly movie favourite, with the most popular selection being screened each month. To vote or provide general feedback on the cinema, visit: Euroa Community Cinema.