Get Back! The man disbanding the beetles from Victoria’s orchards has more than history on his side.

Working in agricultural research with Agriculture Victoria for almost 40 years, David Madge has helped shape the way pest insects are controlled in Victorian orchards, particularly since 2013 when he was the first person to spot a new pest beetle in almond nuts. 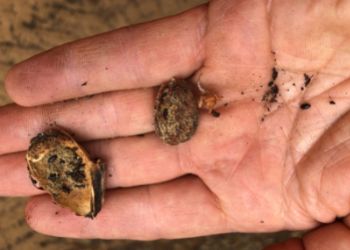 Alerting the industry to a serious new problem, David went on to co-develop a research project investigating the beetle and then lead a further project to reduce its impact – known as Integrated Pest Management (IPM).

Working from Agriculture Victoria’s Mildura SmartFarm and AgriBio , the Centre for AgriBioscience, at Bundoora, David and the IPM team have continued their research into new methods of managing carpophilus beetle and carob moth in Australia’s almond plantations.

“Effective harvest and orchard hygiene are the keys to managing these pests, as both survive and breed in crop residues,” David said.

“When the research showed that leftover nuts on the orchard floor were particularly favoured by the beetle and that current methods to destroy them were not effective, the industry ramped up its efforts to improve hygiene practices, including the commissioning of custom-made hammer mill equipment to pulverise the nuts and the beetles feeding inside them.

“Much more stringent hygiene is now practiced in most almond orchards where the beetle and moth are present.”

Sharing important research findings directly with growers to encourage them to adopt new pest control methods has always been part of the ethos of Agriculture Victoria’s Mildura team, with countless workshops and education sessions run over the years.

“We are at the coalface of industry and research, we are out talking with growers, finding research trial sites on their farms, seeing the issues directly and researching them. This connection really adds value to our research work,” David said.

Bugs could be in David’s blood, as two uncles worked in pest management and his father was South Australia’s chief entomologist.

“Insects rule – when you look at them closely, you see how beautifully they are sculptured. They look like science fiction monsters, and yet they are critical for life on this planet,” he said. An early passion for gardening developed during high school supplied a front-row seat to the fractious interplay between plants and pests, and studies at the University of Adelaide in entomology and horticulture proved the ideal mix.

David joined Agriculture Victoria in 1983 and by the early 1990s was involved in establishing Victoria’s first state-wide network of weather stations in ten vineyards.

“I wrote a program to call and interrogate the stations automatically, which allowed us to predict disease outbreaks based on current weather conditions.

“This information was really important to growers and helped them save time spraying only when needed, as part of a research project on strategic pest and disease management.”

In 1994, David was part of the team presented with the Daniel McAlpine Outstanding Achievement award for implementing the innovative pest management program.

Field research into the management of Fuller’s rose weevil and scale insects in citrus helped the team design a range of orchard practices to tackle the pests.

“From our weevil research, the citrus industry introduced our management recommendations as a key for growers to participate in the citrus export program which helped ramp up Australian citrus exports to Asia.”

A career-highlight for David was being part of Agriculture Victoria’s emergency plague locust response in 2010 when the worst locust plague in 75 years afflicted the state with – at times - 25-kilometre-wide swarms of insects.

“It was an exciting time for an entomologist, we worked seven-day shifts – identifying the species and life stage of large numbers of samples collected by field teams. 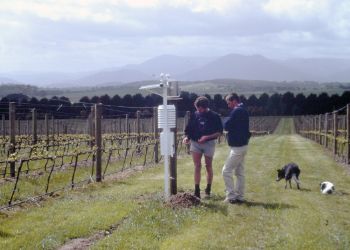 “For treatment to be effective locusts needed to be targeted at a particular stage,” David said.

“Our work was critical to tackling that major outbreak, and our identification photographs and reporting methods were fed into the system to help improve the next response.”

Being at the forefront of the budding organic industry and developing organic manuals for the viticulture and citrus sectors aligned with David’s lifelong passion for sustainability.

“I visited and inspected a lot of vineyards and citrus orchards and pulled together a large amount of information on the best way to grow these crops in line with organic standards.

“Surprisingly, this was the first time that sector-specific organic manuals had been produced for Australia, which has the largest amount of land under organic certification in the world.”

More information about the Mildura SmartFarm and Agribio, the Centre for AgriBioscience can be found online via the Agriculture Victoria website.